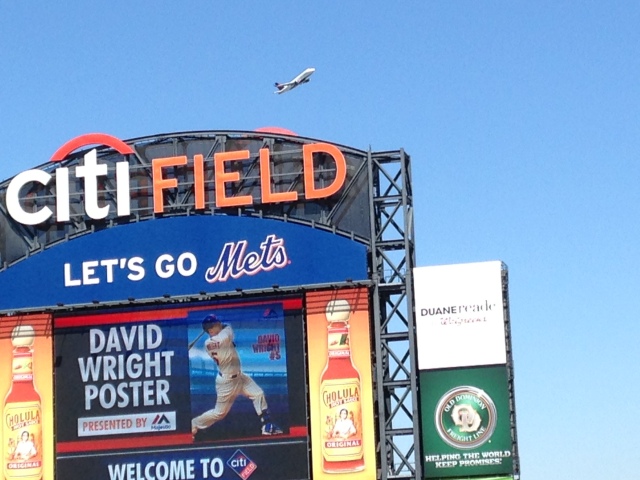 On Monday afternoon, my beloved New York Mets resume their annual quest to reach mediocrity. Once again they will try to win a few more games than they lose. They haven’t done that since 2008. But tomorrow someone will actually shout “Play Ball” in Washington D.C., where the Mets start their season against the Nationals, and baseball will be back.

Throughout spring training, there was a lot of talk that 2015 is a “put up or shut up” year for the Mets. They actually won a lot in March. The wild-eyes optimists were saying that they might even sneak into the playoffs as a wild card team. We’ll see.

But baseball for me has never been about winning and losing. This is, of course, the difference between a Mets fan and a Yankee fan. It’s always about winning for the Yankees. But when I think of the Mets and baseball, I think of my father, my brother, or the solitary pleasure I took in the sport as an overweight kid who was — given the adult I would become — surprisingly shy. I understand that baseball may be the sport of dinosaurs, a second fiddle to football, but I know also that it’s the sport of family.

There is my father, laughing over dinner one night in October 1969, at the way he and the other “mad men” at his Manhattan advertising agency had thrown great heaps of confetti out their skyscraper windows because the Miracle Mets had finally won the World Series and were being given a tickertape parade. The punchline of his story? The parade had not gone past the avenue with his office building. But no one cared, because this was the Mets and this was baseball, and New York’s ultimate losers were winners.

There is my brother, five years my senior, but still willing to play one-on-one Wiffle ball with me for hours, our backstop (and strike zone) the garage door at the end of our driveway. He would also teach me to play the “Official Denny McLain Magnetik Baseball Game.” (Yes, “magnetik” really was spelled that way. In hindsight, that makes sense. McLain was the last pitcher to win 30 games in a single season, but he was also a little wacky.) The game was a metal baseball field roughly two feet square, with a small marble for a baseball and a spring-loaded bat the size of a cigarette. My brother figured out how to pitch a curveball, the marble wrapping around the bat and landing in the strike zone against the wall. I never won; but I always felt loved.

And he taught me a game called dice baseball he found in the “Fireside Book of Baseball.” There I am spending hours alone in the finished basement of our suburban colonial in a New York City suburb in the summers when I was 10, 11, and 12 years old, playing the game on a folding card table. The game was a blunt instrument — double sixes were a home run for every player, pitchers and cleanup hitters alike — but I was addicted to it. Each year I played the same 162-game schedule as the Mets, using their roster, and I kept meticulous statistics on the performance of the players in my fictional league. By hand I frequently calculated the earned run average for my ten pitchers, and the batting average for my 15 position players.

I spent so many hours down there that my parents must have feared I was an elementary school serial killer and I had human body parts in the refrigerator. But I was untroubled and content; it was the perfect respite from the world for a pudgy kid who was awkward and shy.

As poet Donald Hall once reminded us, “Baseball is continuous like nothing else among American things, an endless game of repeated summers, joining the long generations of all the fathers and all the sons.” And, yes, the brothers.

I have no expectations that the Mets will win the pennant this year. But in April? All that matters is that baseball is back, and at least in my mind I am but a son and a brother, and summer, once more, is nearing.

(This column appeared originally in the Burlington Free Press on April 5, 2015. Chris’s most recent novel, “Close Your Eyes, Hold Hands,” arrives in paperback next month.)