Here’s the scene: A conference room in what once was a private home in Burlington, Vermont. The year is 2003. A recently retired direct marketing advertising executive is on one side of the table, a 13-year-old boy on another. They’ve never met and it’s just the two of them. They have to sit there for one hour that afternoon. To break the ice and help pass the time, the boy has brought a deck of Yu-Gi-Oh! dueling monsters trading cards for them play.

“It was torture,” the executive, Bob Hallowell, recalls now with a laugh. The 13-year-old, David Faske, is now 25. He doesn’t disagree. But he is quick to add, “We were two people thrown together in a room for an hour who didn’t know each other. And Bob put a lot of effort into what I liked and what interested me.” 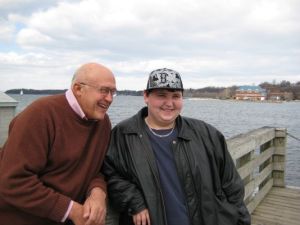 I had breakfast with the two of them earlier this month. Despite a five-decade age difference, the two of them have been fast friends now for 12 years. And it is a friendship that began that afternoon in 2003. Bob had agreed to be a volunteer mentor for Spectrum Youth and Family Services, and David’s mother was looking for a male role model for her teenage son. (David’s parents had divorced when David was a boy.) Bob would mentor David for nine years, often meeting with him weekly, until the younger man turned 22 and was no longer eligible for the Spectrum Mentoring Program. Now the two meet simply as friends.

And both view that friendship as life-changing.

Bob did all the things a mentor might be expected to: He took David fishing. The pair played miniature golf and hit baseballs at the batting cage. They watched dozens of movies together. But he also did the things that made a demonstrable difference in David’s life. Sometimes those things were tangible, such as tracking down David’s birth certificate in Oklahoma for him and teaching him to parallel-park. But sometimes they were intangible – and especially meaningful.

Perhaps the most important thing Bob did was get David enrolled in the Northlands Job Corps Center in Vergennes. Today David is a crew chief with Green Mountain Flagging. He doesn’t merely support himself, he cares for his younger sister and her two children who live with him. When he graduated from the Job Corps at 19, he had symbols for “Honor,” “Loyalty,” and “Respect” tattooed onto his forearm, and everyday he tries to live up to those words.

Mark Redmond, executive director at Spectrum, says there are nearly 60 adults in the group’s mentoring program, each of them attached to a teenager who could use another grownup in his or her life. He thinks there are a number of reasons why the program can be such a game-changer for an adolescent: “Mentoring gives a young person a positive role model, a person who cares about them and opens up their world to new possibilities. A mentor helps improve [a teen’s] self-esteem.”

From Bob’s perspective, mentoring has always been a two-way street. He believes he’s gotten an enormous amount from his friendship with David.

“Everyone thinks they don’t have time to be a mentor,” he says, “but everyone can find an hour a week. Everyone fears they won’t be good enough or they’ll let the kid down. But all you really need to do is show up. David taught me that. Consistently showing up makes a difference. And now? David’s success makes me feel very, very good.”

Even if, alas, Bob still doesn’t completely understand how to play Yu-Gi-Oh!

(This column appeared originally in the Burlington Free Press on November 30, 2014. Chris’s most recent novels are “The Light in the Ruins” and “Close Your Eyes, Hold Hands.”)