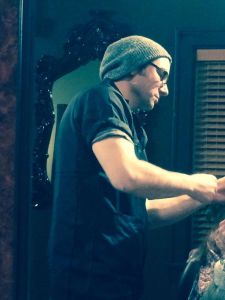 Don O’Connell has a serious issue with Charlie Brown’s friends. He is also, just for the record, not wild about any of the reindeer but Rudolph.

“They’re bullies,” he observed of most of the Peanuts characters. “They treat Charlie Brown horribly. The only one who likes him is Linus – and that kid has serious issues.”

O’Connell was sharing his feelings with me the other day while cutting my hair. He owns O’M, the hair salon on the corner of St. Paul and King Street in Burlington, Vermont with his wife, Serena Magnan. When you have as little hair as I do, it’s really important to get it cut at a place as stylish as O’M and by a serious talent like O’Connell. A drive-in movie could use my forehead as a screen; I need all the help I can get.

“And Rudolph?” O’Connell went on that day, referring to the classic, stop-motion TV adaptation from 1964, “Don’t get me started. His only friend is a dentist. The world is so nasty that they put the misfits on an island. An island! And why do the reindeer treat him like dirt? Because he has a shiny nose. That’s it!”

I think any barber, stylist, or hairdresser needs to be a little eccentric. Sure, you want a professional. But you also want an edge. And O’Connell is perfect for me. I’ve known him for years though the theater community in Vermont: the Lyric Theatre and the Stowe Theatre Guild. Many of you have seen him as Sky Masterson in “Guys and Dolls” (his cool façade), Seymour Krelborn in “Little Shop of Horrors” (his inner nerd), and Captain Hook in “Peter Pan” (his food for the crocodiles side).

I have no idea how O’Connell and I got around to animated and claymation bullies this summer, but I’m glad we did. It wasn’t simply that his monologue – which in a wonderful, Jon Stewart sort of way, bordered on rant – was funny; it was that it was really smart and touched so much in my own childhood.

Now, I was never bullied. I was fortunate in that regard. But my family moved a lot, and I was often the new kid on the block. At one point in my life, I attended five schools in six years in three states. I think that is one of the reasons why I wound up a writer: I spent a lot of my youth as an observer, trying to understand the social mores of new and different worlds.

But I did love Peanuts from an early age. After my mother dropped off my older brother at his weekly drum lesson, she would bring me to a nearby bookstore where she would spend 35 or 40 cents on a Fawcett Crest Peanuts paperback for me: “Very Funny, Charlie Brown” or “You’re a pal, Snoopy!” I loved Peanuts for the same reason that so many generations have loved the cartoon: Charlie Brown is among the most wistful characters ever created. He’s not a complete sad sack, despite his baseball team’s won-lost record; he’s actually rather competent. But the stars seem aligned against him. Charles Schulz rarely wrote a cartoon meant to elicit a belly laugh; rather he leaves us smiling ever so slightly in recognition at the emotional brutality, heartache, and defeat that loom large in all of our lives. I was, I have a feeling, a pretty melancholy kid.

And that’s probably why it’s good to confront my receding airline with a guy like Don O’Connell. Sure, we talk about his acting and my writing. We talk about our pets. But we also get to the issues that really matter, and we approach them the way a lot of guys do: at the edges. Through popular culture and sports and the memes that link generations.

The fact is, good barbers, stylists, and hairdressers don’t simply know their clients’ scalps; they know their heads, too – inside and out.

(This column appeared originally in the Burlington Free Press on June 28, 2015. The paperback of Chris’s most recent novel, “Close Your Eyes, Hold Hands,” was published last month.)