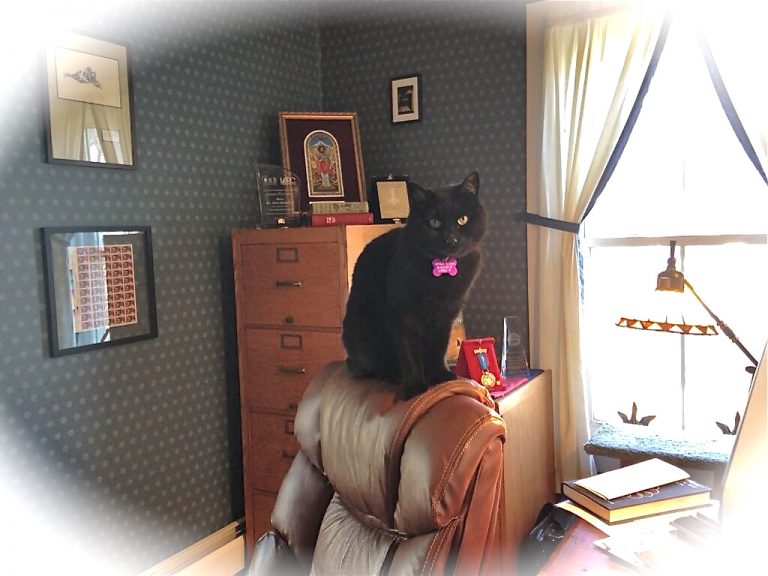 Neil Gaiman says, “This is how you do it; you sit down at the keyboard and put one word after another until it’s done.” Dorothy Parker caustically (but accurately) observed that “writing is the art of applying the ass to the seat.” And Stephen King recommends “butt glue” — or “gluing your butt to the chair in front of the computer and not getting up until you’ve written something.”

I spend a lot of my life with my seat in the seat. Most writers do.

In theory, that means I am at an elevated risk for obesity, diabetes, and heart disease, despite the reality that I also get a lot of exercise. A recent study suggests that I can dial down the risks to my health — this occupational hazard called sitting — if I get up and walk around for a few minutes each hour.

In any case, the result of all that time with my seat in the seat has been 17 published novels, two unpublished ones, a great many magazine articles, lots of book reviews, and somewhere in the neighborhood of 1,210 weekly columns for this newspaper. (And that doesn’t count the monthly business column I wrote from 1988 through 1993.) I wrote my first column for what at the time was the living section of the Burlington Free Press in February 1992. It would officially become Idyll Banter a few years later, a title I gave the column because I liked the pun: I loved Vermont and the idyllic life I had found in a rural corner of Addison County. Since then, I have written the column every single Sunday but three.

How many words is 1,210 columns? Roughly 821,000. That’s the equivalent of eight novels. Some of those columns have been better than others. A lot better. But it was always a privilege and a blessing to try and find the universal relevancy in the idiosyncrasies of my family and my community and the Green Mountains we share.

Has it gotten harder lately? Yes. Not because I love my world any less, but because I don’t want to cover the same material over and over. Twenty-three years has meant, for instance, 23 Mother’s Days. Twenty-three Thanksgivings. Twenty-three Christmas mornings. Moreover, some of my best material has died: my father. My mother. My mother-in-law. Seven cats. Our hermit crabs. Close friends. Eccentric neighbors.

How long is 23-plus years? As I noted the other day, my daughter grew up as I wrote Idyll Banter. She was born after I started. She can now legally order a mojito.

And so while I have loved all of those moments with my seat in the seat, it’s time to get up and walk around. Spend a little less time in my chair. Give someone else a chance to — and here I am paraphrasing Ernest Hemingway — open that vein and share something meaningful.

My last column will be Labor Day weekend. I want to end on the word “labor,” because this has always been a labor of love. It really has.

Moreover, as I wind down, expect to see a few reruns this summer. (Two of the three times I did not have a new column in this space, my editor called it a “Best of.” I won’t be so presumptuous.) My hope after Labor Day is that I will still file a column now and then.

In any case, I thought I would let you know. You are the reason I do this, and so I didn’t want it to be a surprise. In the meantime? Still here. See you around our beloved 802.

(This column appeared originally in the Burlington Free Press on June 7, 2015. The paperback of Chris’s most recent novel, “Close Your Eyes, Hold Hands,” was published last month.)