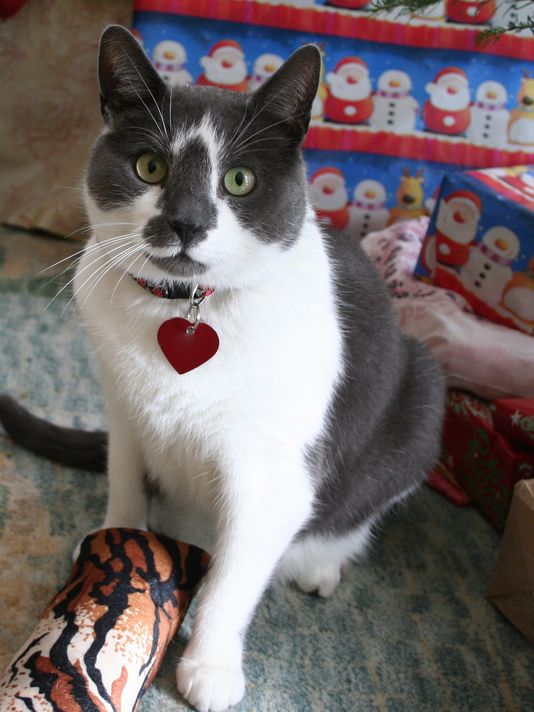 Not long ago, a reader stopped me on Church Street in Burlington, Vermont and asked, “Do your cats still play turd hockey?” I admitted that our five are a little older now, and have accepted the realities of age. “Now it’s more like shuffleboard,” I told her. And then she asked me about Funny Face.

Readers frequently ask me about Funny Face. It’s not merely that I post so many images of him on the social networks; it’s that his story touches something in anyone who follows turd hockey closely — or cares deeply about animals.

It was five years ago this month that I came home from a book tour to find that my wife had adopted another cat from Homeward Bound, the animal shelter in Middlebury. This brought our pride to five, four of which came from the shelter. That new cat was Funny Face.

The rap on Funny Face at the time was that he was, more or less, unadoptable. He was skittish — perhaps even certifiable. Didn’t play well with others in the sandbox. He was also a bit of a bruiser: 15 plus pounds of muscle and obstinacy. He had been living at the shelter for three and a half years, and he was anywhere from six to nine years old.

But my wife had a real soft spot for him. She has been volunteering for years at the shelter, working Tuesday afternoons with those cats most in need of socialization and human contact, and prior to bringing Funny Face home, she had spent a lot of time with him. For a difficult child, he seemed quite content to sit on her lap and drool. (Just for the record, he still drools when he nuzzles against either my wife or me.)

She had initially tried to find him a home other than ours. At her suggestion, I wrote a column about him, but there were no takers. In hindsight, I probably shouldn’t have begun the essay with an homage to cats in Lady Gaga wigs. Live and learn. And so my wife decided that his best chance for happiness was with us, despite the fact we already had four cats and Funny Face wasn’t supposed to like other animals.

The reality is that he wasn’t difficult at all and he liked our other cats just fine. He fit right in, joined the turd hockey team, and found his favorite spot by the woodstove. He figured out quickly the boundaries of our yard and our barn, and happily sprayed every single bush, tree trunk, and clapboard within two feet of the ground. These days, he lives in my lap for long hours when I write, drooling all over my sweatshirts. When the weather’s right, he makes his rounds outside, leaving out the front door and then coming to my library window — the other side of the house — when he wants in. He is, in short, a great cat.

And that is precisely why his fifth anniversary with us matters.

But very often those are precisely the cats and dogs that make the best additions to a family. They can be profoundly grateful, deeply appreciative — and very, very loving. And a loyal pet makes anyone a little more human. (Good Lord, even the Grinch had Max the Dog. Dr. Evil had Mr. Bigglesworth the Hairless Cat.)

The fact is, there are a lot of animals in this world living in a lot of cages. My sense is that most of them are just waiting for that one person willing to give them a chance. My wife was that one person for Funny Face.

(This column appeared originally in the Burlington Free Press on March 22, 2015. Chris’s most recent novels include “Close Your Eyes, Hold Hands,” “The Light in the Ruins,” and “The Sandcastle Girls.”)