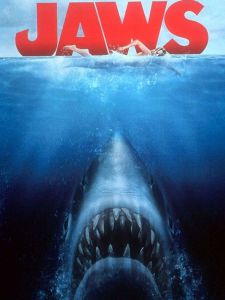 Earlier this month I gave a speech on Cape Cod, and I was struck by how much the elbow of the peninsula has fallen in love with the great white shark. In Chatham, there was a display of wooden sharks painted and designed by area artists on Main Street: “Sharks in the Park.” Signs along the sand in nearby Nauset Beach in Orleans had colorful renderings of the beast, often beside warnings not to swim near the seals since sharks feed on them. And this month Chatham opened its official Shark Center.

Once upon a time, this strategy might have been viewed as the Ford Edsel or Bic Underwear of tourism Big Ideas. We’re talking serious tourism suicide. After all, people don’t line up to swim with the sharks the way we do to swim with the dolphins.

The truth is, anyone my age or older started to view the seashore a little differently 40 years ago this summer. Why? A young woman stripped off her clothes as she ran toward the surf on a magnificent, moonlit summer night, and was devoured a few moments later by a great white shark. That summer we all watched a human head roll into the water from a hole in the bottom of a small fishing boat. And we’ll never forget a police chief remarking — his voice somewhere between scared and stunned — “We’re going to need a bigger boat.”

And, of course, we all knew the music, the inexorable E and F from the tuba as the massive killing machine swam toward its prey.

I am referring, of course, to “Jaws.” The movie was a phenomenon, a summer blockbuster before there really was such a thing, and among director Steven Spielberg’s earliest feature films.

The movie is about a resort town convinced that the presence of a shark is going to destroy its summer tourism season — and so the very last thing they want to do is remind people that there is a thing in the water with 300 teeth and a willingness to eat anything in its path. So, are towns such as Chatham and Orleans studies in irony or examples of savvy tourism marketing? Clearly the latter.

Lisa Franz, executive director of the Chatham Chamber of Commerce, told me there were a few naysayers when the idea first emerged to acknowledge that — Surprise! — the Atlantic Ocean has sharks. This was six years ago. She admitted that she herself was a little wary of the water after seeing the film for the first time when she was younger. “Now it seems kind of silly,” she says. “People get such enjoyment out of the movie.”

I was in middle school in the midst of the original “Jaws” phenomenon and my family had recently moved from a suburb of New York City to a suburb of Miami, Florida. It was in a period when I went to four schools in four years (and, eventually, five schools in six). One result of being the new kid on the block was the amount of time I spent reading, often at the Hialeah-Miami Lakes Public Library. As a novelist, I owe those shelves an incalculable debt. And among the books I consumed as relentlessly as a shark was Peter Benchley’s novel, “Jaws.”

I saw the movie twice in the summer of 1975, once soon after my family and I witnessed some fishermen on Islamorada — one of the Florida Keys — bringing onto the dock a pair of lemon sharks that were considerably bigger than my father.

The movie remains one of those films that has stood the test of time, even if the mechanical shark could have used the sort of computer enhancement that we now take for granted. But we can all see the movie again on the big screen a week from today. (Here in northern Vermont, it will be playing at the Palace 9 in South Burlington.)

And if you can’t see the movie there? Head to Chatham. It’s a terrific town with great faith in the great white. Visit the Shark Center. Wave at — but don’t swim near — the seals.

The traditional gift for a 40th anniversary is a ruby. Yup, a precious stone the color of blood. Perfect. Happy Anniversary, “Jaws.” See you on the screen — because heaven knows I have no desire to see you in the surf.

(This column appeared originally in the Burlington Free Press on June 14, 2015. The paperback of Chris’s most recent novel, “Close Your Eyes, Hold Hands,” is now out in paperback.)