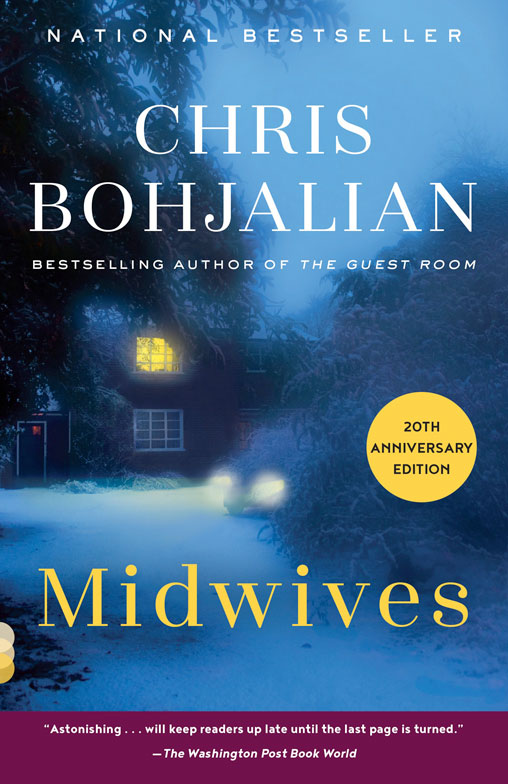 BIG NEWS: MIDWIVES will premiere as a brand new stage play in January 2020 at the George Street Playhouse and will be directed by Sheryl Kaller. This brand new adaptation was written by Chris.  Stay tuned for ticket information and details.

SYNOPSIS
On an icy winter night in an isolated house in rural Vermont, a seasoned midwife named Sibyl Danforth takes desperate measures to save a baby’s life. She performs an emergency cesarean section on a mother she believes has died of a stroke. But what if Sibyl’s patient wasn’t dead—and Sybil inadvertently killed her? As Sibyl faces the antagonism of the law, the hostility of traditional doctors, and the accusations of her own conscience, Midwivesengages, moves, and transfixes us as only the very best novels ever do.

“Astonishing … will keep readers up late at night until the last page is turned.”
— Washington Post Book World

“Superbly crafted and astonishingly powerful …. It will thrill readers who cherish their worn copies of To Kill A Mockingbird.”
— People

“Among the many achievements of this gripping, insightful novel is the remarkable fullness with which Bohjalian writes …. Readers will find themselves mesmerized by the irresistible momentum of the narrative and by Bohjalian’s graceful, lucid, irony-laced prose.”
— Publishers Weekly

“A treasure …. It is a rare pleasure when a finely written novel also grips us with sheer storytelling power.”
— Portland Oregonian