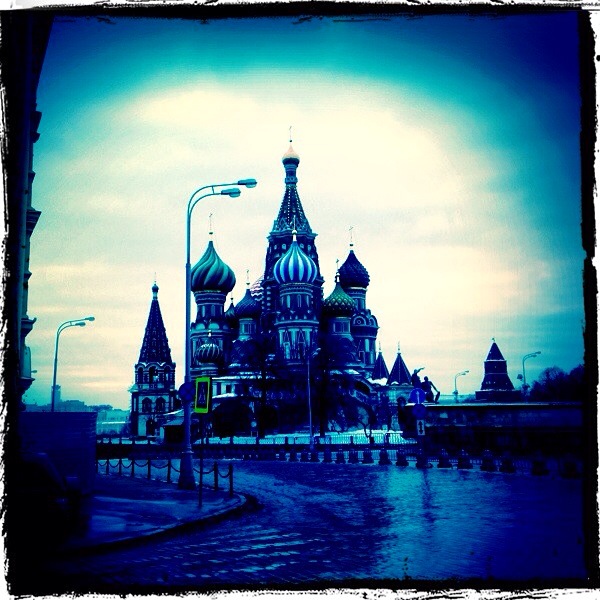 It’s a Sunday afternoon and I am wandering alone toward St. Basil’s, the iconic church with the candy-colored, storybook minarets. I stop before a series of ice sculptures as tall as basketball centers. I pause to take a photo of what I believe is a magisterial ice horse rearing up on its hind legs. There is a vendor nearby selling Russian nesting dolls, including ones of Putin and Lenin, and he has his young daughter with him. She looks to be seven or eight years old, and she’s bundled up in a pink parka with a faux fur hood.

“Would you like me to take your picture beside the sculpture?” the vendor asks me. He has one of those terrific spy movie accents.

“That would be great,” I say, handing him my iPhone. “Your English is excellent – which is good, since my Russian is non-existent.”

“It’s okay. My daughter’s is better.”

I lean over slightly and say to the girl, “You can already speak English? I am very impressed.”

She blushes and looks down at her boots, but doesn’t say anything. So, I take a few steps back to the sculpture and stand beside it. “This horse is incredible,” I tell them.

The child starts to speak, but stops.

She glances at her father. He smiles and says, “Tell him.”

“It’s not a horse. It’s a unicorn,” she explains patently to me. It is indeed, I see. I had failed to notice its icy horn.

“You’re a guest,” her father says. “She knows hospitality is important.”

I had gone to Russia for a few days to celebrate the Russian edition of one of my novels, and so while the visit wasn’t much longer than the journey itself, every moment was pretty spectacular. I didn’t drink as much vodka as I expected, but I drank way more Armenian cognac. And I made a lot of friends, none of whom minded that in some ways I positively exude Idiot American.

I also wondered on occasion if the sun ever shines in Moscow, because it sure didn’t appear when I was there. The skies were gray and almost always spitting snow.

Moscow weather is, of course, famous. It stopped Hitler cold in his tracks and destroyed Napoleon’s army more than a century earlier. Yet the weather was a whole lot better in Moscow than it was in the Green Mountains. When I left Vermont, my house was on its second day without electricity and the trees were struggling worse than Atlas beneath the weight of heavy snow. I must admit, I took pride in the idea that I hailed from a state where the winters make Moscow feel balmy.

But what surprised me most was how festive the city was despite the endless lack of sunshine, the economic sanctions, and the fact that the ruble was about as valuable as Confederate currency. It wasn’t a dour place at all. The Christmas lights, silver and red and blue, were elegant and massive, lining the boulevards and draping the sides of the buildings. People were ice-skating in Red Square. No one seemed to mind when I made jokes about a shirtless Vladimir Putin. (Just for the record, I never ended my remarks by shouting, “Free the Ukraine.” My hotel was near the Lubyanka, the yellow brick building that once housed the KGB. I didn’t want to press my luck.)

And when I think of my visit last month, I recall that father and daughter selling nesting dolls near St. Basil’s. They were one more reminder that even when nations have geopolitical disagreements, there is always room for kindness and courtesy – and hospitality.

Do svidaniya, Moscow. Thanks for the memories.

(This column appeared originally in the Burlington Free Press on January 11, 2015. The paperback of Chris’s most recent novel, “Close Your Eyes, Hold Hands,” arrives in May. Below is a preview of the new cover.)