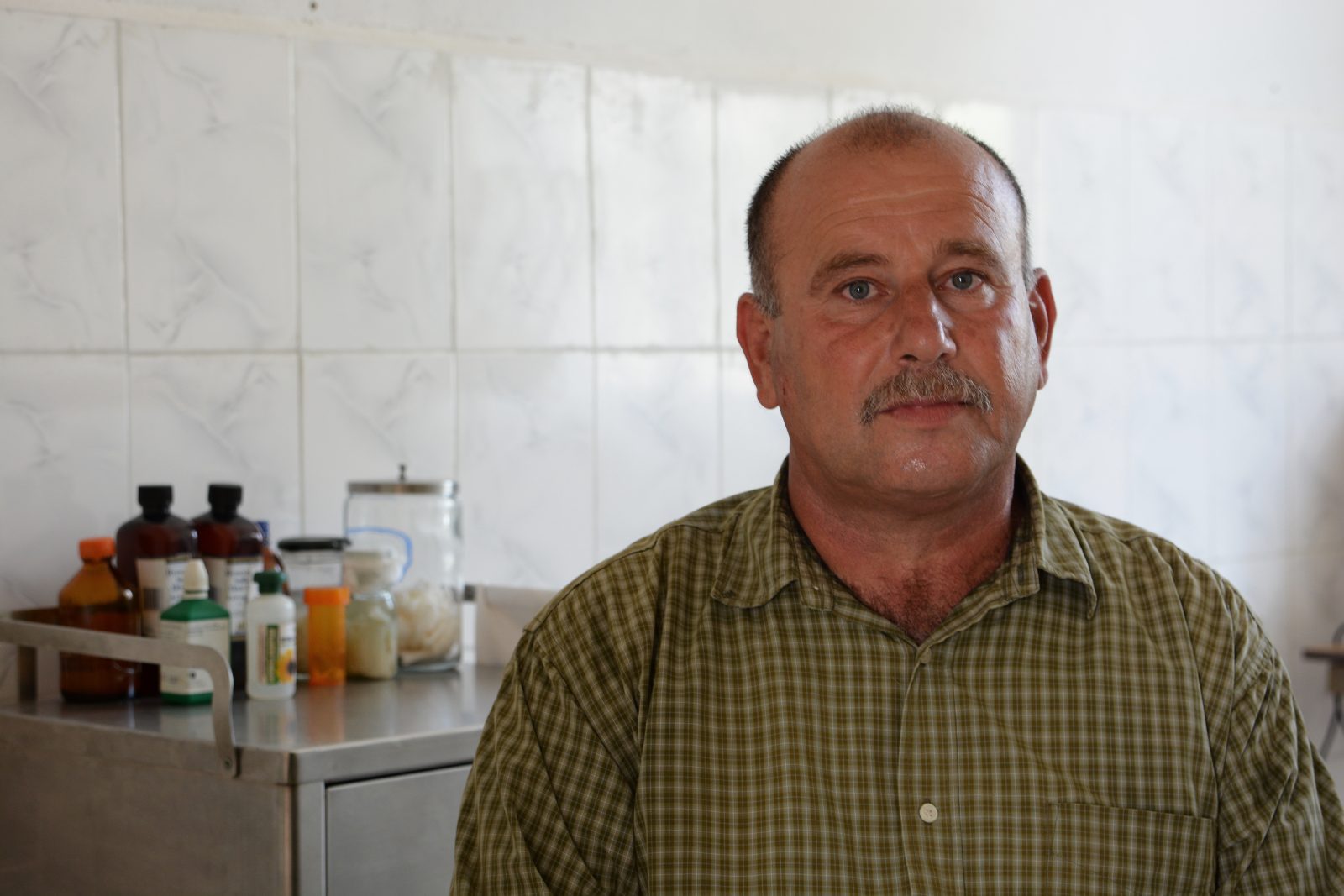 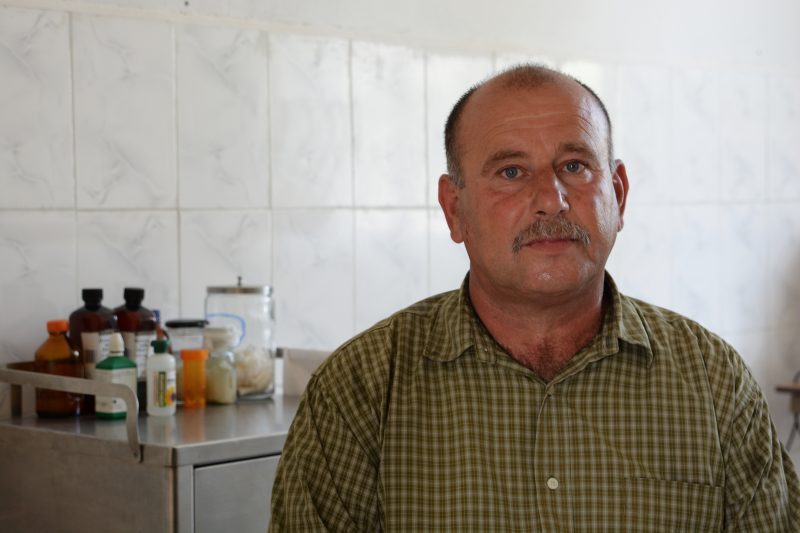 For most of America, the heartbreaking faces of Syrian refugees this year have belonged to children. We have seen them drowned and we have seen them stunned into silence by warfare and covered in blood. (We’ve also seen them likened to Skittles, but that appalling analogy belongs only to the Trumps.)

At the moment, however, when I put a real face on the refugee crisis I see a balding 50-year-old man with gentle green eyes and a salt and pepper mustache. I met him on the second to last day in August in Ishkhanadzor, a modest village in Nagorno-Karabakh, the fledgling Armenian republic in the Caucasus that is still struggling for recognition. Ishkhanadzor is about 15 miles north of the Araxes River and the border with Iran. Among the town’s 360 residents is one physician, Haig Khatchadourian, a soft-spoken neuropathologist who now works as a general practitioner in the village’s seven-room clinic. He is also a refugee.

In the summer of 2014, ISIS fighters from Tunisia, Libya, and Iraq came to his summer home in Tal Hmedy, a town in northeastern Syria, and took him by force to their administrative building and court. Khatchadourian does not recall the date, but he remembers it was two in the afternoon and his three daughters — all between 12 and 14 years old then — were present. He told the girls that if he did not return home that night, they should take the bus to their relatives in the city of Al-Qamishli. At the court, ISIS administrators demanded that he renounce his Christianity, telling him that he would be brought to the center of the village and executed if he didn’t.

“I expected to be beheaded,” he told me as we chatted together in the shade from a small copse of trees outside his apartment in Ishkhanadzor. “I refused to convert. I was prepared to die a Christian because life has no meaning if you give up your faith.”

After four hours before the court, however, the ISIS tribunal released him. He has absolutely no idea why and they never gave him a reason. Two days earlier he had witnessed ISIS fighters executing a Muslim in the village center for saying something negative about the prophet Muhammad. The man’s executioner was his own nephew.

At the time, Khatchadourian and his three daughters were dividing their time between their primary residence in Al-Qamishli and Tal Hmedy. Al-Qamishli technically was never under ISIS control and the doctor and his family could have remained there. But the Syrian conflict was all around them and Khatchadourian feared everyday for the safety of his daughters — and lived with the prospect that he might not be alive to raise them.

And so in 2015 he and his girls emigrated north to Nagorno-Karabakh, a mountainous, Armenian-populated enclave lodged between Iran, Azerbaijan, and Armenia. In the village and the surrounding area, they joined 200 other Syrian and Lebanese Armenian refugees. He says he and his family are very happy here: “We like that we are surrounded by Armenians. And we like that everyone here has recognized us as human beings.”

Here in the United States, of course, “refugee” and “immigrant” are frightening words in some people’s opinion. This is especially true if the refugees are from Syria. So far, the U.S. has welcomed roughly 12,000 Syrian refugees, a number that has made barely a dent into the crisis brought on by the Syrian civil war and the rise of ISIS. To put this in perspective, Canada has taken in over 50,000 refugees, Germany has welcomed 600,000, and even tiny Belgium has accepted 16,000. And then, of course, there are the Middle Eastern countries that have taken in quite literally millions, including Lebanon, which is home to well over 1.25 million Syrian refugees.

I have met refugee children from Syria in schools in Lebanon, Armenia, and Canada, and their resilience and good cheer has left me awed.

The reality is that I am the grandson of survivors of the Armenian Genocide, which means that I am a grandson of immigrants from the Middle East. In the wake of the Hamidian Massacre in the 1890s and then the Ottoman Empire’s slaughter of 1.5 million of my ancestors during the First World War, the U.S. welcomed easily 75,000 Armenian immigrants. It’s why today there are such large Armenian-American communities in Massachusetts, New Jersey and California.

And so when I travel to places such as Ishkhanadzor, I’m ashamed of the way the U.S. has turned “refugee” and “immigrant” into synonyms for “terrorist.” (Even here in Vermont, the mayor of Rutland has been pilloried because he is bringing 100 refugees to his municipality.) It’s not merely that we are a nation of immigrants or that the bedrock of our national identity is our historical willingness to welcome the tired and homeless and poor, those “huddled masses yearning to breathe free” (thank you, Emma Lazarus). It’s that we have the resources that a struggling, largely unrecognized republic such as Nagorno-Karabakh can only dream of. The roads around Ishkhanadzor are dirt and have a diabolical predilection to flatten car tires. (On my journey there at the end of the summer, my small caravan of three SUVs suffered two flats in a morning.) Khatchadourian’s clinic only has hot water sporadically, because the boiler is an antique. Likewise, there are hours (and days) when it is without electricity.

But he insists he has found happiness there that he never had in Syria. “Everyone here is my daughters’ friend — and mine,” he said. “We are part of the community.”

I realize that a refugee such as Khatchadourian is less threatening to some Americans because he’s a Christian, not a Muslim. But like all refugees he is – as he put it when we spoke in the shade of those trees – first and foremost a human being. And that’s a reality that Americans should come to embrace.

(This column appeared originally in the Burlington Free Press on October 16, 2016 and in USA Today on October 18. The paperback of Chris’s most recent novel, “The Guest Room,” arrives wherever books are sold this Tuesday, October 25.)