MOVIE UPDATE
The “Secrets of Eden” movie premiered on Lifetime Television on February 4. Check the Lifetime website or local listings to see when it will air next. Watch a preview here. The film stars John Stamos and Anna Gunn. 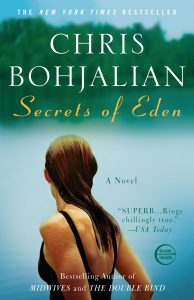 SYNOPSIS
From the bestselling author of Midwives, The Double Bind, and Skeletons at the Feast comes a novel of shattered faith, intimate secrets, and the delicate exploration of the nature of sacrifice.

Chris Bohjalian’s latest novel is rich with his elegant, page-turning prose and builds to the sort of ending that left millions of readers of The Double Bind and Midwives speechless and stunned – and hungry for another of his books.

“There,” says Alice Hayward to Reverend Stephen Drew, just after her baptism, and just before going home to the husband who will kill her that evening and then shoot himself. Drew, tortured by the cryptic finality of that short utterance, feels his faith in God slipping away and is saved from despair only by a meeting with Heather Laurent, the author of wildly successful, inspirational books about . . . angels.

Heather survived a childhood that culminated in her parents’ murder-suicide, so she identifies deeply with Alice and George’s daughter, Katie, offering herself as a mentor to the girl and a shoulder for Stephen – who flees the pulpit to be with Heather and see if there is anything to be salvaged from the spiritual wreckage around him. But then the State’s Attorney begins to suspect that Alice’s husband may not have killed himself. . .and finds out that Alice had secrets only her minister knew.

Novelist and Cosmopolitan editor John Searles featured Secrets of Eden on his winter roundup of books to read on the NBC Today Show.

Watch Chris’s interview with Bethanne Patrick in the Book Studio. Bethanne is always a great interviewer, and she asked Chris some questions he had never been asked before.

“Superb. . .Fans of Bohjalian’s 11 other novels (including Midwives) know to expect the unexpected and, thanks to his creativity and cunning, readers usually get walloped by one heck of a plot twist by book’s end. In Secrets of Eden, the old saw that none of us knows what really goes on in a house when the shades are drawn rings chillingly true.”
—Carol Memmott, USA Today

“Suspenseful. . .searing. . .Bohjalian has written a literary murder mystery that hooks readers early and keeps its secrets until the end. . .Bohjalian’s book is about the power of secrets and sacrifice and a warning against jumping to judgment. Those who doubt their faith, he writes, are sometimes the strongest among us.”
—Amy Driscoll, The Miami Herald

“Superbly written — vivid and horrifying without being melodramatic…a tribute to Bohjalian’s storytelling skill.”
—The Boston Globe

“Chris Bohjalian has always known how to keep the pages turning. In his latest novel, a small Vermont hamlet has been racked by a well-established couple’s apparent murder-suicide. Bohjalian describes the aftermath of that ruinous night in varied voices, effortlessly slipping into the heads of the shaken local pastor, the no-nonsense deputy state attorney, and the best-selling author whose own past draws her to the scene of the crime. . .[A] study of guilt and grief.”
— Entertainment Weekly

“The eden of Chris Bohjalian’s new thriller is Haverill, Vt., where Stephen Drew is the minister at the Baptist church. And, as usual, there are more snakes lurking than meet the eye.”
—Amy Virshup, The New York Times

“Page-turning. . .Bohjalian has a knack for creating nuanced, detailed first-person female characters. . .Secrets of Eden speeds along pleasingly as both thriller and character study.”
—Seattle Times

“To call this fine novel a mystery would be like calling the Hallelujah Chorus a nice song. . .Bohjalian has written a gripping story that keeps the reader turning pages to find out what really happened. . .But there is so much more in this rich story. Bohjalian delves into the profound mysteries of human existence. What is faith? What is love? And who are really the angels among us?”
—Linda Brinson, Winston-Salem Journal

“Secrets of Eden is a taut story about the consequences of domestic violence with a subplot about faith. . .Bohjalian is a very sympathetic and empathetic writer. He understands emotions and isn’t afraid to feel them as he writes. . .[The novel] is ripe for discussion, debate and dissection.”
—Deirdre Parker Smith, Salisbury Post

“Secrets of Eden is a riveting literary mystery about the secrets we keep, the misunderstandings that divide and isolate us and the sacrifices we make. It has enough twists and turns to keep you frantically turning the pages. But what makes it such a deeply satisfying read is its penetrating insight into the complexities of both the human psyche and the human heart.”
— Robert Reid, Waterloo Region Record (Canada)

“A smart, well-constructed story, ‘Secrets of Eden’ weaves the complexities of an explosive situation with the fragility of human response and understanding into a story that captivates, holds you until its final pages, and that forces you reflect on the repercussions of abuse on us all.”
—Wendy Thomas, Nashua Telegraph

“Bohjalian hits his stride when he channels a fourth voice that’s fresh, incisive and, at times, chilling. . .The novel’s real subject isn’t the victims or perpetrators of domestic violence but the ways in which observers react to it — or, too often, underreact. When someone finally does something decisive — even outside the law — it’s hard not to want to stand up and cheer.”
— Margot Harrison, Seven Days

“Artfully crafted. . .poignant. . .Weaving in an atmosphere of dolubt and intrigue presents a perfect opportunity for debate about the real meaning of right and wrong.”
— Kathy Habel, Fredericksburg Free Lance-Star

“Bohjalian (Law of Similars) has built a reputation on his rich characters and immersing readers in diverse subjects—homeopathy, animal rights activism, midwifery—and his latest surely won’t disappoint. The morning after her baptism into the Rev. Stephen Drew’s Vermont Baptist church, Alice Hayward and her abusive husband are found dead in their home, an apparent murder-suicide. Stephen, the novel’s first narrator, is so racked with guilt over his failure to save Alice that he leaves town. Soon, he meets Heather Laurent, the author of a book about angels whose own parents’ marriage also ended in tragedy. Stephen’s deeply sympathetic narration is challenged by the next two narrators: deputy state attorney Catherine Benincasa, whose suspicions are aroused initially by Stephen’s abrupt departure (and then by questions about his relationship with Alice), and Heather, who distances herself from Stephen for similar reasons and risks the trip into her dark past by seeking out Katie, the Haywards’ now-orphaned 15-year-old daughter who puts into play the final pieces of the puzzle, setting things up for a touching twist. Fans of Bohjalian’s more exotic works will miss learning something new, but this is a masterfully human and compassionate tale. (Feb.)”
— Publishers Weekly, Starred and Boxed Review

“Specificity and complexity and. . .a somber power.”
— Kirkus Reviews

“Welcome to the bucolic hamlet of Haverill, Vt., as portrayed in Chris Bohjalian’s Secrets of Eden (Shaye Areheart, Feb.). As the novel opens, the murder-suicide of a prominent couple has shocked the population: on the same day as her baptism by the Rev. Stephen Drew, Alice Hayward returns home to her husband, George, who will strangle her that evening and then shoot himself. The story is told from the perspectives of four characters: Rev. Drew, who, disillusioned with his faith, leaves town almost immediately; State’s Attorney Catherine Benincasa, who suspects George was murdered; Heather Laurents, an inspirational writer; and Katie Hayward, the orphaned Hayward daughter. I loved the subtle and gradual way that the facts of the incident are revealed. Bohjalian’s prose is flawless, as is his understanding of the many facets of the human condition: wife beating, alcoholism, and infidelity are social issues that play major roles. As much as I love Bohjalian’s books—I’ve read most of them—Secrets may become my favorite. Book groups will eat this one up.”
— Carol Katsoulis, Publishers Weekly “Galley Talk”