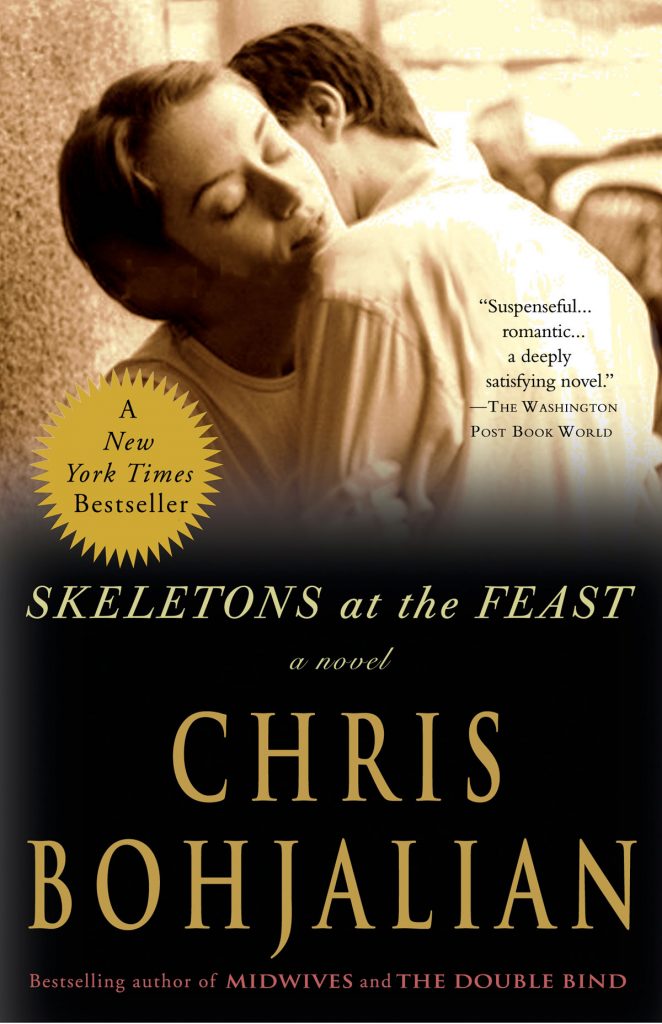 A St. Louis Post Dispatch 2008 Best Book of the Year

Special Note: Skeletons at the Feast was inspired by an actual World War Two diary. To see some of the published secondary sources Chris used, visit the novel’s acknowledgements. One memoir in particular that he found both informative and inspirational was Gerda Weissmann Klein’s poignant and powerful account of her adolescence and young adulthood, All But My Life. The fictional character in his novel, Cecile Fournier, owes much to her. To read All But My Life, visit your local bookstore or visit visit www.bn.com or www.amazon.com. To learn more about the Gerda and Kurt Klein Foundation and the work they do promoting tolerance and respect for others, visit www.kleinfoundation.org.

Chris joined Todd Moe in March on North Country Public Radio. To listen to the nine-minute interiew or download it to your iPod, click here.

Perhaps not since The English Patient has a novel captured both the power and poignancy of romance and the terror and tragedy of war: From Chris Bohjalian comes a dramatic love story sure to enthrall his millions of readers.

In January, 1945, in the waning months of the Second World War, a small group of people begin the longest journey of their lives: An attempt to cross the remnants of the Third Reich, from Warsaw to the Rhine if necessary, to reach the British and American lines.

Among the group? There is 18-year-old Anna Emmerich, the daughter of Prussian aristocrats who were originally pleased when their massive estate once more become a part of Germany in 1939, but who discovered over the next five years what Nazi management really meant for their rural district.

There is her lover, Callum Finella, a 20-year-old prisoner-of-war who was brought from the stalag to her family’s farm as forced labor. And there is a 26-year-old Wehrmacht corporal who the pair know as Manfred – but who is, in reality, Uri Singer, a Jew from Germany who managed a daring escape from a train bound for Auschwitz, and who has been sabotaging the Nazi war effort in every way he can ever since.

As the three of them, as well as Anna’s mother and younger brother, work their way west, they encounter a ravaged countryside that is both horrific and surreal: There is evidence of both the Nazis’ crimes, as well as the revenge being wrought by the Soviet Army. Their flight will test both Anna and Callum’s love, as well as their friendship with Manfred—assuming any of them even survive.

Skillfully capturing the flesh-and-blood behind a part of history we know little about and employing his prodigious storytelling gifts, Chris Bohjalian has crafted a rich tapestry that puts a moving face on one of the 20th-century’s greatest tragedies—while creating, perhaps, a masterpiece that will haunt readers for generations.

Watch what critics and book groups are saying.

Listen to a teaser for Skeletons at the Feast Audiobook!

[zoomsounds_player artistname="Chris Bohjalian" songname="Skeletons at the Feast" type="detect" dzsap_meta_source_attachment_id="3950" source="https://chrisbohjalian.com/wp-content/uploads/2019/06/skeletons-at-the-feast-audio.mp3" thumb="https://chrisbohjalian.com/wp-content/uploads/2019/06/saf-video-poster.jpg" config="default" cover="https://chrisbohjalian.com/wp-content/uploads/2019/06/saf-video-poster.jpg" autoplay="off" loop="off" open_in_ultibox="off" enable_likes="off" enable_views="off" play_in_footer_player="off" enable_download_button="off" download_custom_link_enable="off"]
Would you like to hear more?
Instant download of the audiobook from any of these sellers:
• Amazon
• Barnes & Noble
• IndieBound
• Walmart
• Penguin Random House
“Bohjalian is another favorite author of mine. This is the perfect novel for a book club because there’s so much to discuss. The story is set in World War II and follows a group of German refugees as they flee their homeland. Normally, I’m not a big fan of historical fiction, but this book sucked me right in. It opens with a young girl who’s trying to get across a frozen river with her family, but enemy soldiers are bombing the ice to keep people from crossing. It’s vivid and heart-wrenching. One interesting sidenote: The author was inspired to write this book when someone gave him an unpublished diary of a Prussian woman who fled west in 1945.”

“Harrowing. . .Bohjalian spins a suspenseful tale in which the plot triumphs over any single sorrow. . .[His] sense of character and place, his skillful plotting and his clear grasp of this confusing period of history make for a deeply satisfying novel, one that asks readers to consider, and reconsider, how they would rise to the challenge of terrible deprivation and agonizing moral choices.”

“A bittersweet story of romance, war and death, inspired in part by a real diary. . .Strongly dramatic and full of the heartbreaking horror of war, this novel is Bohjalian at his imaginative best.”

“A poignant account of the conflict’s last year. . .Harrowing. . .In creating the Emmerichs and their relationship to Uri, Bohjalian has given us something new and disturbing. He has also created a wonderful character in the protected child, Theo, whose gradual understanding of what is happening to them is moving and real. . .Bohjalian has given us an important addition to the story of World War II, and, not at all incidentally, may expand the vision of those who may have avoided ‘Holocaust literature’ in the past.”

“Harrowing. . .ingenious. . .compelling. . .Judging who’s right or wrong is difficult in ‘Skeletons at the Feast,’ and one senses that’s just the way Bohjalian wants it. . .A tightly woven, moving story for anyone who thinks there’s nothing left to learn, or feel, about the Second World War. That Bohjalian can extract greater truths about faith, hope and compassion from something as mundane as a diary is testament not only to his skill as a writer but also to the enduring ability of well-written war fiction to stir our deepest emotions.”

“Reading Bohjalian’s descriptions of terror and tragedy on the road has just as much impact as seeing newsreels from the end of World War II. . .While creating suspense, Bohjalian agilely balances the moral ambiguities of war.”

“Once in a while a novel comes along that crawls into your soul from the first page and won’t let go, even long after you’ve read the final word. Your perspective is changed; you’ve been transported to another place and time. Skeletons at the Feast is such a novel. . .Definitely a keeper, this book is very highly recommended.”

“This story mixes the nail-biting brutality of T’he Kite Runner with the emotional intimacy of Anne Frank’s diary.”

“”Bohjalian is a good storyteller; he doesn’t flinch from the beyond-horrendous parts of the war, yet he infuses the hell- on-earth with hope through his characters. Cecile never loses hope, though it is often dimmed by outrageous violence. Uri, although painfully cynical for a young man, still has drive for one thing — he wants to tell the world what the Germans have done to the Jews. The Emmerichs march on for each other, even though the family is decimated. A death just as the family gains hope they will be safe is devastating and feels like a personal loss. That anyone survives the cold, disease, starvation, beatings, fear, anger, hatred and utter blind stupidity is a miracle, but Bohjalian makes it happen.”

“Bohjalian’s Skeletons at the Feast is a deftly crafted and empathetically woven novel of survival and hope.”

“It takes beautiful writing to really bring to light the horrors of war — and Bohjalian (Midwives, The Double Bind) is at the top of his form in this romantic historical novel. . .Eloquent in its horrors and heartbreaking in its depictions of love, Skeletons at the Feast deserves all of the accolades it has earned, including a Washington Post Best Book of 2008.”

“Intense and fascinating. . .Bohjalian masterfully presents the desperation of troops who realize their cause is doomed.. . .He successfully captures the humanity of one of the 20th century’s most horrendous tragedies.”

“An extraordinary historical novel based on the exodus of Germans in eastern Germany escaping the Soviet Army’s advance in the waning days of World War II. . . A sense of justice pervades all of [Bohjalian’s’] books. He demands that we act humanely toward one another and understand and respect others’ beliefs and values. . .Skeletons at the Feast is not a screed on good vs. evil, but it does inspire thought on man’s inhumanity to man, and, conversely, how individuals overcome adversity with acts of kindness, civility and integrity,”

“Rich in character and gorgeous writing.”

“Nail-biting, heart-ripping. . .truly brilliant. The reader of Skeletons at the Feast is quietly checkmated by Bohjalian into a radical compassion we’ve heard somewhere before: Love Thy Enemy . . . I loved this unforgettable novel.” (To read the full review, click here.)”

“Riveting. . .an unforgettable finale. . .Chris Bohjalian handles the context of this story effortlessly and has created characters so engaging that any reader will find themselves connecting with these very real people.. . .I hail Bohjalian’s new novel and its fearless account of one of the greatest tragedies of the 20th century.”

“A deeply moving and engrossing novel. . .Bohjalian has created a microcosm of that devastating winter of 1945. . . he makes us care deeply for his characters. His terse, dry prose renders the most appalling atrocities in an almost stoic manner, doubling the emotional impact.”

“Sheer storytelling. . .an epic romance. . . Bohjalian is especially good at conveying the surreal ‘beauty,’ the misshapen lyricism, of the war-torn landscape . . . From harrowing to inspiring.”

“Carefully researched detail and an unflinching eye . . . Bohjalian’s well-chosen descriptions capture the anguish of a tragic era and the dehumanizing desolation wrought by war.”

“Bohjalian demonstrates an intricate historical knowledge and impressively illustrates the stark horrors of the time…A compelling read with its mix of history, romance and portrayals of strength in the midst of severe adversity: War really is hell, the book says, but the human spirit is ultimately salvageable.”

“A lush romance, reflecting resilience in the face of nearly certain tragedy….a trenchant epic that is both agonizing and enriching.”

“Chris Bohjalian has written his finest novel to date, set against the brutal, waning days of World War Two in Eastern Germany….Skeletons at the Feast is Bohjalian’s masterpiece. The power of the narrative will stay with the reader long after it is put down. Inspired by an actual World War II diary the author read, it will stand as one of the best novels ever written about one of the most brutal periods in history.”

“Immensely readable…Bohjalian takes a fresh perspective and details the brutal realities of World War II in a novel that for once does not focus entirely on the Allies. Recommended for fiction collections.”

“A fictional tale of love, violence and redemption. . . Bohjalian deftly moves from the journey to the back stories of each character, fleshing out their histories and making their choices more poignant as their friendship and interdependence develop. Who will live and who will die? The author keeps up the suspense until the last page, with a surprise twist at the end.” 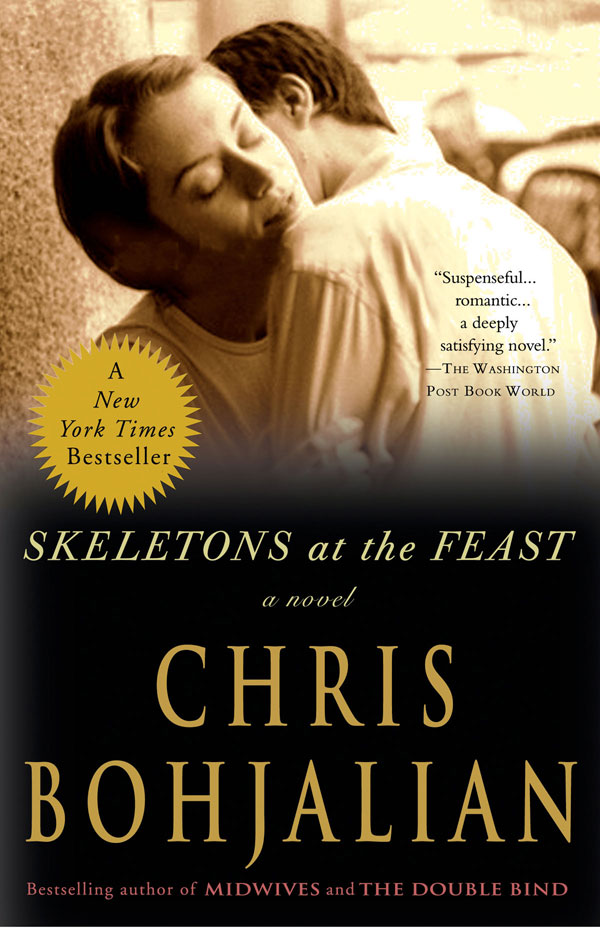