WATCH THE TV COMMERCIAL FOR THE FLIGHT ATTENDANT 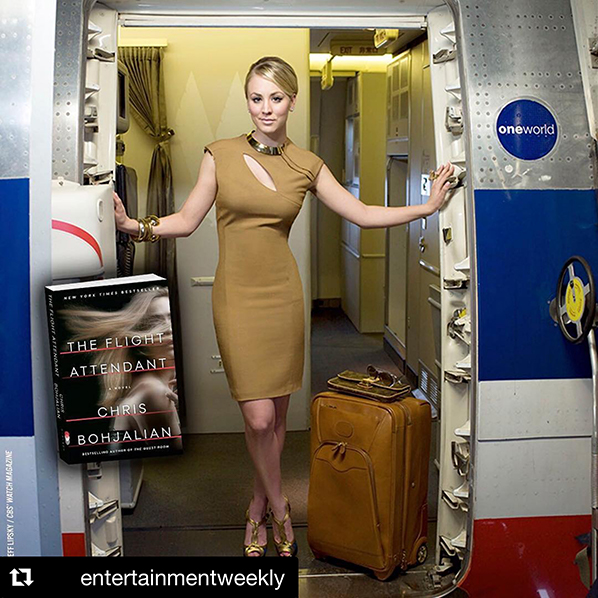 “Filled with turbulence and sudden plunges in altitude, ‘The Flight Attendant’ is a very rare thriller whose penultimate chapter made me think to myself, ‘I didn’t see that coming.’ The novel — Bohjalian’s 20th — is also enhanced by his deftness in sketching out vivid characters and locales and by his obvious research into the realities of airline work.”
— Maureen Corrigan, The Washington Post

“The stakes couldn’t be higher (literally)as Cassandra pieces together a mystery while working 40,000 feet above ground in Chris Bohjalian’s gripping The Flight Attendant. Read it before Kaley Cuoco stars in the upcoming series!”
— Cosmopolitan

“The author provides enough twists for a roller coaster fan…The beauty of the book is that, along with the politics of the plot, Cassie’s humanity comes through…the last 100 pages turn tense as you try to follow the unexpected but believable surprises Bohjalian has in store and answers whether Cassie can find salvation.”
— Amanda St. Amand, St. Louis Post-Dispatch

“Bohjalian is masterful at leaving clues in plain sight, making you kick yourself later that you failed to see them. Like a modern Agatha Christie, the answers to the riddle were always there, but we believed the wrong person or trusted the wrong narrative…The twists and turns are abundant enough to keep the reader guessing and wondering who is telling the truth.”
— Adriana Delgado, Seattle Post-Intelligencer

“A magnificent book…sleek and gorgeous…This is a Master Class in fiction.”.”
— Augusten Burroughs

“Flight attendant Cassie Bowden: a self-destructive alcoholic who favors one-night stands, a gifted liar, a petty thief. But she’s also someone we can relate to: a soul damaged during childhood, terribly alone, and desperate for love. . .Readers who enjoyed the imperfect heroine in Paula Hawkins’s The Girl on the Train and the anxiety-ridden paranoia of Fyodor Dostoyevsky’s Crime and Punishment will be hooked by this murder mystery.”
— Library Journal (Starred Review)

“Bohjalian is an unfaltering storyteller who crosses genres with fluidity, from historical fiction to literary thrillers. He is also that rare male writer who has mastered the female point of view with adroit credibility, and he is nonjudgmental and sensitive in his portrayal of Cassie’s alcohol and sex addictions. As in previous novels…Bohjalian revisits the notion of what happens when an individual loses control of his or her environment in a read-in-one-sitting escapade that is as intellectually satisfying as it is emotionally entertaining.”
—Booklist (Starred Review)

“A high-octane thriller that will have you holding your breath with every page…As if ripped from today’s headlines, Bohjalian paints a vivid portrait of death and despair on a canvas of Russian espionage.”
— Nicholas Addison Thomas, Fredericksburg Free Lane-Star

“A turbulent behind-the-scenes look at the lives of cabin crew members and a pitiless profile of a woman destined for a psychological crash landing. . .While structured as a thriller, the novel is strongest as a character study.  Cassie is a hot, frighteningly believable mess, as endangered by alcoholism as by espionage. Bohjalian nails the floating loneliness that can affect flight crew members, and all business road warriors, amidst their untethered schedules; mixed with a splash of self-loathing it can lead to a life on the rocks.”
— Passport Magazine (April’s Book of the Month)

“Heart-stopping intrigue in this excellently written novel that involves Russian conspiracy, narrow escapes and a mystery that sinks as deep as the depths the protagonist must go to before she can save her own life.”
— Asheville Citizen Times

“A taut mystery and spy thriller that will keep readers up late at night turning the pages until the breath-holding conclusion.”
— Michael F. Epstein, The Bennington Banner

“The Flight Attendant’ is the sort of book that one can’t help but read quickly. The writing is dynamic and the plot is seductive; the reader is helpless against the urge to know what happens next. It’s remarkable enough that Chris Bohjalian continues to produce work with such prolificacy, but to create stories this energetic and exciting and flat-out fun … it’s really something special.”
— The Maine Edge

“Chris Bohjalian is a master of suspense and pacing. . .Brace yourself for a blockbuster ending!”
— Kate Ayers, Bookreporter

“This cat-and-mouse game will have your heart in your throat until the crazy twist at the end. Anyone who is a fan of TV’s ‘The Americans,’ about Russian spies among us, should put ‘The Flight Attendant’ on their list.”
— Diane LaRue, the Auburn Citizen

“From this gripping opening, Bohjalian spins out a tale that is half jet-setting international thriller and half character study.”
— Seven Days

“Exciting and suspenseful and hugely entertaining. ‘The Flight Attendant’ is rich with detail gleaned from years of observation and inquiry, but its real power is as a page-turner. I loved it.”
— Addison Independent

“Here’s a milestone: Bohjalian is publishing his 20th novel, and as always it combines popular tropes with a serious examination of social issues. Binge-drinking flight attendant Cassandra Bowden wakes up with another bad hangover in a Dubai hotel room and finds the man she spent the night with lying dead beside her. She flees, lying her way from the ride to the airport through the flight to Paris to her encounter with FBI agents at flight’s end. What really happened? And what are the consequences of addiction, deception, and denial? Fans are lining up.”
— Barbara Hoffert, Library Journal

“Between Elmore Leonard’s Rum Punch and the Air France cocaine scandals, you would think flight attendants would be staple of crime fiction.  What better profession for a story about a man/woman on the run, caught up in international intrigue?  And yet their appearances in the canon are few and far between.  Thankfully, suspense master Chris Bohjalian is on the beat with this year’s new release, about a hard living airline employee who wakes up in Dubai next to a dead body and has to piece together the sordid story.”
— Literary Hub

From the New York Times bestselling author of The Guest Room, a powerful story about the ways an entire life can change in one night: A flight attendant wakes up in the wrong hotel, in the wrong bed, with a dead man – and no idea what happened.

Cassandra Bowden is no stranger to hungover mornings. She’s a binge drinker, her job with the airline making it easy to find adventure, and the occasional blackouts seem to be inevitable. She lives with them, and the accompanying self-loathing. When she awakes in a Dubai hotel room, she tries to piece the previous night back together, counting the minutes until she has to catch her crew shuttle to the airport. She quietly slides out of bed, careful not to aggravate her already pounding head, and looks at the man she spent the night with. She sees his dark hair. His utter stillness. And blood, a slick, still wet pool on the crisp white sheets. Afraid to call the police – she’s a single woman alone in a hotel room far from home – Cassie begins to lie. She lies as she joins the other flight attendants and pilots in the van. She lies on the way to Paris as she works the first class cabin. She lies to the FBI agents in New York who meet her at the gate. Soon it’s too late to come clean-or face the truth about what really happened back in Dubai. Could she have killed him? If not, who did?

Set amid the captivating world of those whose lives unfold at forty thousand feet, The Flight Attendant unveils a spellbinding story of memory, of the giddy pleasures of alcohol and the devastating consequences of addiction, and of murder far from home.