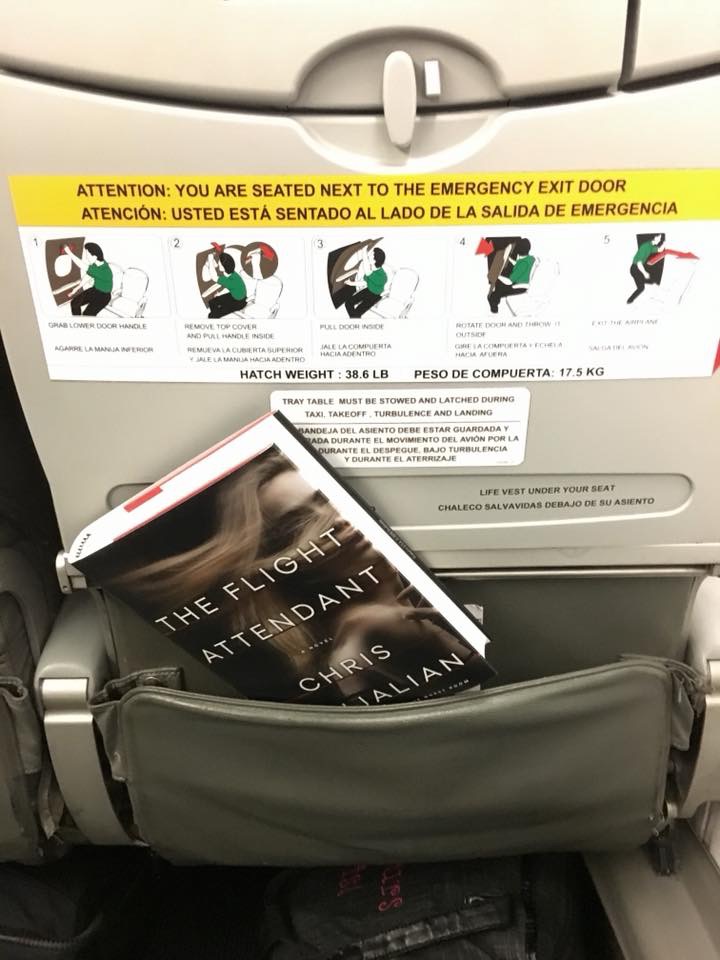 When I was a boy, I had an uncle who married a flight attendant—or what we called back then a (forgive me) stewardess.

It was his second marriage and I was too young to understand the enticing aroma of scandal that swirled around the divorce from his first wife, but even as an elementary school kid I picked up on the glamour of his new bride. She was beautiful, in her late-twenties, and already had traveled all over the world. She had a dachshund that she carried with her like a purse. Her uniform was cerulean: bluer than the skies in which she lived a sizable part of her life.

Further adding to the romance of their marriage was the fact that years earlier my uncle had jumped out of airplanes. He was a paratrooper and had jumped over Normandy in June, 1944, and three and a half months later over the Netherlands. In the decades since his days as a member of the 101st Airborne, he had continued to travel for business. It was how he had met his second wife: on an airplane.

Sometimes, my family joked that his new wife was a spy.

Or, perhaps, given his service in the war and the amount of time he spent now at 35,000 feet, they both were.

Once upon a time, flying was considered so exciting—and not in a “brace for impact” sort of way—that we looked at those remarkable people who flew those Boeing 707s or brought us our playing cards and presumed that they lived lives far more interesting than ours. It wasn’t just the exotic destinations they saw; often it was something more. We told ourselves that they worked for the CIA or the KGB. Or they smuggled carry-on bags of cocaine in and out of America. Or they laundered whole suitcases of cash.

Flying was, after all, the perfect cover for someone who was either a patriot (for our side or theirs) or up to all manner of nefarious activities. In some ways, it still is. You have a reason to go to Moscow. You have an excuse to go Berlin.  (There were always stories about Pan Am’s role in the Cold War.) Obviously cabin crews pass through security, just like the rest of us. But the security is different.

Moreover, back then there was a special allure because there were no cell phones or computers to keep these shooting stars tethered to us mere mortals back on earth. When I was interviewing flight attendants for my new novel, a veteran who had been flying over thirty years told me, “When I was young, I might be the extra or the replacement, and I’d get a call at the last minute to be on the next flight to Paris. I’d phone my parents or my sister, but if I didn’t reach them, they’d have no idea where I was. I’d be off radar for the next couple of days. It was exhilarating to just disappear like that.”

There were also fewer flights then, and so the layovers were longer, especially if you were off to India, the Middle East, or Asia.

And even when we referred to them dismissively as—the sexism appalling—stewies, we knew this: they had what Napolean Dynamite would call “mad skills.” Incredible training. If that plane goes down, they won’t be the ones screaming into their yellow oxygen masks.

I think it was only a matter of time before I would write a novel about one.

Hollywood has latched on to the idea of the flight attendant as a criminal or spy more often than literature, and even those TV shows and films have been rare. I think that’s because while people often think the job of a flight attendant is one of alluring escape, the reality is the exact opposite. They live out of suitcases (no one packs as brilliantly and as compactly as a flight attendant); they constantly have to desert their homes or families; and these days they see little more of a city than the airport hotels. And then there are all of us, the passengers, who sometimes misbehave with despicable abandon. We’ve all seen people fight for space in the overhead bins as if they’re trying to grab the last spot in the lifeboat; we’ve all seen passengers nearly come to blows over the right to recline a seat; and we’ve all see flight attendants have to chastise or discipline entitled passengers who drink too much or won’t switch their devices to airplane mode or simply demand that someone in the cabin crew perform a miracle and get the plane to Chicago in time to make their connection.

One retired FBI agent I interviewed did share with me that the bureau has stables of professionals that can play small roles in an operation, usually surveillance, and certainly flight attendants are among them. They can be the eyes the bureau needs at 35,000 feet, after the jet bridge is retracted.

But the stories that I came across in my research that left me most surprised were less about the clandestine activities of flight attendants than they were about the ways passengers can make their lives hell: climbing atop the drink cart. A parent allowing a little boy to try (and fail!) to use an air sickness bag as a urinal while standing in the aisle beside their seat. Or simply forgetting that please and thank-you can make a world of different to flight attendants on their fourth flight of the day.

And so with my new novel, I was after something different: a case of mistaken identity. My flight attendant would not be a criminal or a spy, but she would be caught up in a tsunami of international intrigue and assassination both because of what she does for a living and her own peccadillos. She’s a scarred, wounded bird who drinks far too much and one day awakes hungover in a hotel room in a faraway land beside a dead body. I had Roger Thornhill in mind, the hard-drinking ad man from Alfred Hitchcock’s wonderful 1959 movie, “North by Northwest.” Thornhill (the always impeccable, even when soused, Cary Grant) is caught in a web of Russian and American spies, but he doesn’t know who wants to kill him—or why. Perhaps that was a more plausible and a more interesting scenario for a professional who spends her time moving from one airport hotel to another, living out of an expertly packed suitcase, and interacting with an endless stream of strangers. If the flight attendant’s life is akin to a fugitive’s, the overwhelming sensation, even more than departure, must be one of disorientation.

Looking back, I think it’s unlikely that my aunt the flight attendant was a spy. But novels have long gestation periods, and I’m not sure my new thriller would exist if it weren’t for her—and for all those wondrous eddies of intrigue, real or imagined, that she left in her wake.