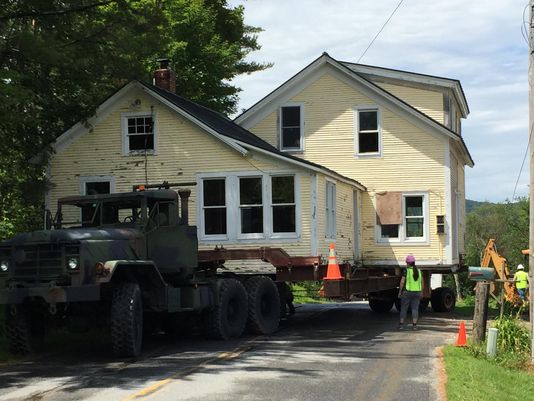 Finding an 1880 Vermont farmhouse, fully intact, smack in the middle of the road just never gets old. Watching it on a flatbed truck ascend a 13 percent grade? Even better. Such was the nail-biting theater here in Lincoln last Wednesday afternoon. Christie Sumner’s old house was becoming Todd and Jen Goodyear’s new one, and they were moving it up the hill to where the paved road turns to dirt roughly six miles up the western side of the Lincoln Gap.

“Are you nervous?” I asked Todd as we watched the house begin its journey.

Only once would his heart skip a beat that afternoon. A little over two hours after the structure began its climb, it paused just beyond the steepest section of the pitch: New England Building Movers of Bridport had to trim some tree branches in the way of the roof, and the flatbed started rolling backwards down the hill. The driver stopped the slide and Monte Provencher, owner of the company, said he was never alarmed. “It was a great day,” he told me that night. “Better than better.”

The house, roughly 45 feet long and 34 feet wide, had started up the hill at precisely 1:04 p.m. and was parked on the Goodyear property at 3:57 p.m. It traveled eight-tenths of a mile in just under three hours that afternoon, and climbed somewhere in the neighborhood of 175 feet.

And yet my favorite part of this story isn’t the move: it’s what the Goodyears paid for the house. It was a freebie.

The hand-painted wooden sign went up on the Lincoln Gap road last summer: “Free house. Serious takers only.” Behind it was a handsome nineteenth-century structure, the yellow paint peeling but the edifice itself in excellent condition. Christie Sumner had lived there since 1974. Now she was building a new house on the property behind it and she wanted it gone. In a perfect world, however, she wouldn’t tear it down. Someone would want it and take it away. After all, it was a perfectly good building.

Enter Todd Goodyear, the interim pastor at the First Baptist Church of Bristol and the area director for Addison County Young Life. He liked the house and noted the sign – and how you really couldn’t beat the price. He and his wife were planning on building a new home for their family a little further up the mountain in what can only be called the Goodyear compound: already eight other families with Goodyear blood in their veins lived up there.

Then, however, his builder, Averi Smith texted him a photo of the sign with the question, “What do you think?” Todd said that sealed the deal.

“This is recycling in a big way,” Averi told me. “And even if there weren’t financial savings, who doesn’t want to save a wonderful old house?” He expects to have the structure renovated and ready for Todd’s family by the end of autumn.

Moreover, this particular old house has special meaning for Todd. A fellow named Winfred Rhodes purchased the house in 1917 and lived there with his wife Lois and their children for decades. Todd’s great-grandmother and Winfred’s father were siblings, and so Todd feels a familial link to those nineteenth-century beams and walls of horsehair plaster.

Todd’s uncle, Gilbert Goodyear, lives near where the old house was dropped off and is thrilled that “the old home has a new life with a young family.”

Todd’s father, Bruce Goodyear, lives just down the road. “I hear there’s some riffraff moving in,” he told me, a broad smile on his face, “but we can live with that.”

Indeed. It’s not often that moving day begins by moving the whole house.

(This column appeared originally in the Burlington Free Press on July 26, 2015. The paperback of Chris’s most recent novel, “Close Your Eyes, Hold Hands,” was published in May.)