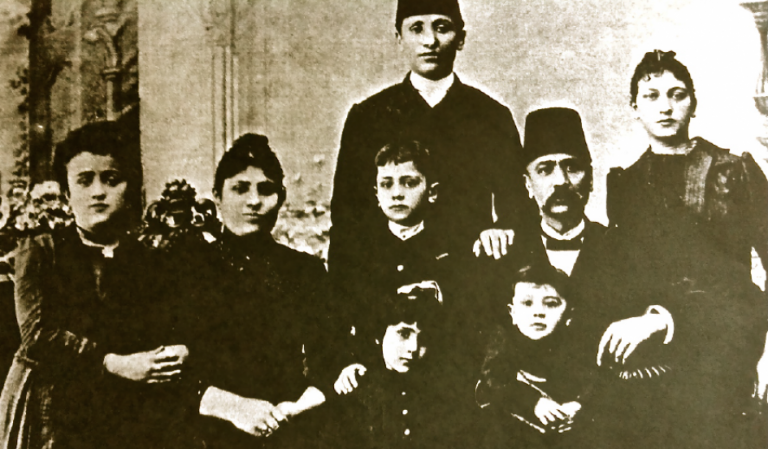 The photo can only be called exotic. It was taken at the end of the 19th century in an Ottoman city southeast of Ankara called Kayseri. It’s a fraying family portrait of the eight people who comprise the Bohjalian family, and the toddler sitting in his father’s lap is my grandfather, Levon Nazareth—or Leo as he would come to be called when he sailed to the United States decades later with his new bride, Haigouhi Sherinian. She may already have been pregnant with my father, the first of their three children.

My brother and my cousins and I all have our stories about Leo and Haigouhi. There was our demure grandmother’s extraordinary prowess as a pool player in a Westchester suburb of New York City. There was the time she took her handbag and practically beat an assailant senseless with it when he tried to rob her in Washington Heights in upper Manhattan. There was our grandfather playing his beloved oud, a stringed instrument a bit like a lute, on Sunday afternoons. He is wearing a suit because in our memories he is always wearing a suit. (I once asked his daughter, my Aunt Rose Mary, whether her father had always worn a suit when she was growing up. She laughed and said, “Of course, not. I remember one time when he was cleaning the oil burner, he took off his jacket.”)

But as for Leo’s parents? We knew nothing about his mother and next to nothing about his father—that fellow on whose lap Leo was sitting in that old family photo. His name was Nazaret and, supposedly, he was a tailor. We were told that he might have dabbled as a writer.

This year marks the centennial of the start of the Armenian Genocide: It was April 24, 1915, when the Armenian intellectuals, professionals, editors and religious leaders in Constantinople were rounded up by the Ottoman authorities—and almost all of them executed. During World War I, the Ottoman Empire would systematically annihilate 1.5 million of its Armenian citizens, or three out of every four living there. The majority of Armenians alive today are descendants of those few survivors. It was just this April when Pope Francis acknowledged the slaughter and called it genocide.

My grandparents rarely spoke about what they had seen or what their families in the Ottoman Empire or the Middle East had experienced. We knew only bits and pieces.

We knew, for example, that our grandmother’s father provided cavalry horses to the Ottoman Army and had for years by 1915. The horse farm was on the outskirts of Ankara. That spring, instead of buying the horses legally as they always had in the past, they simply shot her father to death, confiscated the herd, and then—for good measure—confiscated the family home. But our grandfather’s family? We knew almost nothing. Leo had already journeyed to America. We knew he had three brothers in the Middle East or Anatolia, one of whom may have been a pharmacist in Cairo in 1915, but all of them were lost to the mysts of history. Our grandfather either never knew or never shared what happened to them, and to this day their disappearance (or death) remains a mystery.

In the mid-1920s, my grandfather journeyed to Paris to meet Haigouhi, and there they would fall in love and marry. In 1927 he brought her to New York City, and the next year he built the beautiful brick monolith in Tuckahoe, New York, where they would raise their children and reside for 40 years.

Which brings me back to my great-grandfather in Kayseri—the fellow in that antique photograph whose name was Nazaret.

This spring I unearthed a book that has been in my attic for nearly a quarter of a century. It’s a volume from an old Armenian encyclopedia of sorts about the notables from Kayseri. My Aunt Rose Mary gave it to me when she and her husband sold their house in 1992. I understood it had mattered to my aunt and, before her, to my grandparents. She said as a young writer I should have it, but I didn’t know why and I still can’t read Armenian.

When I was thumbing through it this spring, however, I came across a photograph of my great-grandfather. There he was, the man from that antique family portrait. And so I shared the encyclopedia with my friend, Khatchig Mouradian, a genocide scholar who speaks and reads Armenian, asking him to translate the sections around the image of Nazaret Bohjalian.

It seems that my great-grandfather was not merely a tailor who may have dabbled as a writer. He was a poet. He was, as a matter of fact, a troubadour: He sang as well as wrote. In the five-page entry about him in that book, he is described as a prodigy. At 14, he was brought from Kayseri to Jerusalem to perform. He was writing and singing in Constantinople as a teenager and throughout his 20s. Only at the age of 30 did he return to Kayseri to marry and start a family. But he continued to write.

His poems taught morals and values, and were cheerful celebrations of the people around him and the beauty in life. Think Walt Whitman.

In 1896, however, the tone of his work changed. As a prologue of sorts to the Armenian Genocide, roughly a quarter of a million Armenians in the Ottoman Empire were butchered between 1894 and 1896 in what have come to be called the Hamidian Massacres—named after Sultan Abdul Hamid II. On November 18, 1895, the slaughter came to Kayseri. My great-grandfather was there. A few months later, he wrote a 70-quatrain epic about what he saw. Among the couplets?

“They killed infidels with axes, daggers, and didn’t ask who you were, whether merchant or coolie.”

“They took the babies out of the wombs of their mothers, and those who witnessed lost their minds.”

I will never know precisely why my grandfather never spoke of his father’s renown. Perhaps he didn’t realize the extent of Nazaret’s accomplishments. Levon was the youngest child, born only years before his father would die in 1902 from natural causes. Moreover, we can only conjecture how the family was scattered first by the Hamidian Massacres and then by the Armenian Genocide.

When we discuss genocide, we always begin with the numbers: the six million. The 1.5 million. But it’s not just the souls that we lose, it’s the stories.

My novel of the Armenian Genocide, The Sandcastle Girls, was published in 2012, and I assumed at the time that I was the first Bohjalian to try and make sense of this cataclysmic crime through art. It was only this spring, however, that I understood I was but the second.

(This column appeared originally in Newsweek on April 21, 2015. Chris Bohjalian is the author of 18 books, including his novel of the Armenian Genocide, “The Sandcastle Girls.”)