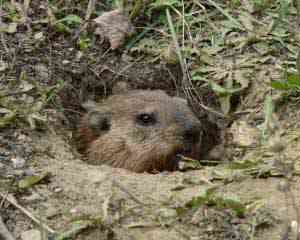 It says a lot about our respect for meteorologists that once again tomorrow morning we will all pretend it is the Middle Ages and look to a six- or seven-pound rodent to forecast the weather. Moreover, we will not merely ask a groundhog’s prediction for the next day or two … we will ask the little varmint whether winter is going to hang around for another six weeks.

Groundhog Day is, of course, the stuff of legend. The late, great director and screenwriter Harold Ramis crafted a wonderful romance around Feb. 2 starring Bill Murray and Andie MacDowell: “Groundhog Day.” Men who otherwise know better don tuxedoes and top hats and hang around a place called — I am not kidding — Gobbler’s Knob. And my lovely bride and I first met on Groundhog Day (though not in Punxsutawney, Pa.)

But if the rituals surrounding Groundhog Day are merely a momentary diversion for most of us, how must they feel to actual meteorologists? I have friends who forecast the weather here in Vermont, and so I asked a few to weigh in on the groundhog. Here’s what they said.

•Gary Sadowsky, WCAX-TV: “Groundhog Day is that one day when I can sit back, relax, and let some rodent do my job for me. If he’s right, he can have all the glory. That’s fine. If he’s wrong, then he can take the blame that’s usually placed on my shoulders. And that’s what’s more likely to happen. One of our ‘keeper’ graphics says, ‘Six Weeks Ago, The Groundhog Said …’ We show that one six weeks after Groundhog Day, because his (or her) forecast is usually dead wrong. So, that’s our revenge on the groundhog’s ‘expertise.’”

Gary added that when you study meteorology, “Groundhog 101 is a rigorous, five-credit course. The only prerequisite is to live in a hole in the ground for a year previous to taking it.”

•Tom Messner, WPTZ-TV: “I love Groundhog Day! It’s a celebration of weather. Even better, it promotes a diversion of blame for a change. Even though another long winter is a certainty around here, I prefer to let the groundhog deliver that news. And while predicting weather for the next six weeks is difficult whether you’re a groundhog or a human, I’m confident it takes a trained meteorologist to be 100 percent sure of Vermont’s short-range forecast: Increasing darkness tonight with scattered light toward morning!”

Tom also wondered how in the world the groundhog could fail to see his shadow with all those television lights on him.

•Mark Breen, Vermont Public Radio’s “Eye on the Sky” and Fairbanks Museum Meteorologist: “I seem to waffle on my feeling for this pesky rodent like one of those forecasts between snow or rain. I can’t say I’m jealous. Sure, he has his ‘day in the sun’ — or the clouds – but most years he is soon slumbering without a care as winter finishes up. And while he gets a forecast right now and then, his average locally is 41 percent right, based on February and March temperatures. I can’t say that demonstrates anything in the way of forecasting prowess.”

Mark has taught classes on weather lore at the Fairbanks Museum for over 30 years, and so while he doesn’t have a lot of faith in the groundhog as a meteorologist, he does appreciate the way the animal “exemplifies how some weather lore gets started.”

For instance, the mid-point of winter is near Feb. 2. In addition, European settlers, accustomed to spotting bears and badgers, would see woodchucks emerging from hibernation around this time of the year — though that was often far south of Vermont. “Locally, the mating season occurs later, in March or even early April,” Mark explained. “This suggests we might not want to rely on a ‘foreign’ groundhog, nor should we be checking in February. Perhaps Town Meeting Day would be more appropriate, though that could raise another host of issues that I would not even attempt to address.”

Indeed. Perhaps the healthiest response came from Sharon Meyer at WCAX-TV, who said simply, “I love the groundhog! He’s cute and we need something warm and fuzzy in the dead of winter!”

I agree. And while I understand the little guy has no formal training, I still hope he doesn’t see his shadow tomorrow — and we all savor an early spring.

(This column appeared originally in the Burlington Free Press on February 1, 2015. Chris’s most recent novels include “The Light in the Ruins,” “Close Your Eyes, Hold Hands,” and “The Light in the Ruins.” You can learn more about his books, his cats, and where his travels are bringing him at www.chrisbohjalian.com .)