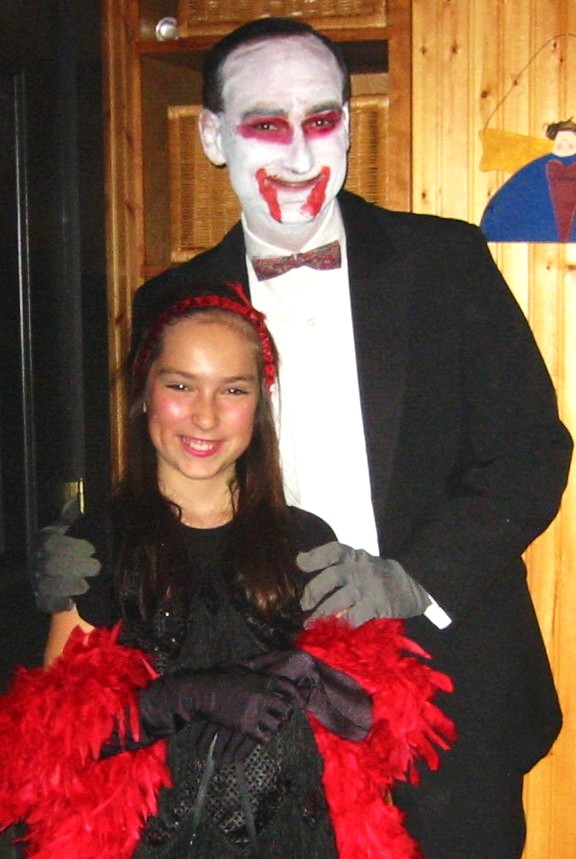 Let’s set the scene. My wife and I are newlyweds in our early twenties. We have, as a matter of fact, been married not quite three weeks. We’ve only recently returned from our honeymoon. We live in an apartment on the third floor of a five-story walkup in Brooklyn. And now it’s Halloween. It’s a Wednesday night.

And so at the end of the day my wife returns home from the 104th floor of the World Trade Center where she works, and I race back from the office in midtown Manhattan where I’m employed. We put candles in the small pumpkins we have hollowed out and line them in a row in the third floor hallway from the top of the stairs to our front door. We put a cassette with our spooky Halloween cries and moans – ghost porn, we call it – in the cassette player. I dress in my vampire tuxedo and my wife climbs inside a very slinky black witch’s dress. We both put plastic fangs on our front teeth. We pour bags of candy into a punch bowl, a wedding present we’ll use maybe twice in the ensuing years for punch, and wait for the first trick-or-treater.

A little before nine o’clock, we blow out the candles in the pumpkins. We have had – and this is an exact number, not a hyperbolic estimate – zero trick-or-treaters. We’re talking the big goose egg.

Now, common sense might have told us not to expect any trick-or-treaters given that:

Nevertheless, at the end of the evening, my wife and I were. . .disappointed. Sad. Melancholic. We had high hopes for our first Halloween together. Don’t most newlyweds?

A few years later, we would be ensconced in the nineteenth-century Victorian in Lincoln, Vermont in which we would build our lives and raise our daughter. Now, I know from my friends and family who live in Brooklyn that Halloween there can be rock concert awesome. My wife’s and my first Halloween together was an attempt to court clinical depression because we were new to the borough and hadn’t the slightest idea what we were doing.

But Lincoln has proven a terrific place to indulge our inner ghouls. I think New England is built for Halloween. (Sure, New York has Sleepy Hollow. We have the House of the Seven Gables.) It’s not simply our Puritan preoccupation with sin or the fact we actually executed people for being witches in Salem. New England has very old cemeteries. Wrought iron fences. Trees denuded of leaves by now that look eerily skeletal.

We live the memes here. We walk amongst the iconography.

Here in the center of Lincoln, we will have easily a hundred trick-or-treaters. (In the center of nearby Bristol, some people will have three times that many.) And, frankly, I think we’d have that many even if we had a hairy guy who smelled like a bus station bathroom on our front steps. People would just think he was a part of our annual Halloween display.

For my wife and me, that’s a great gift. Sure, in most ways Halloween is an utterly ridiculous holiday – unless you’re a dentist or you own stock in a candy company. But it’s also ridiculous fun.

And now it is a mere 12 days away. Time to find my vampire tuxedo.

(This column appeared originally in the Burlington Free Press. Chris’s most recent novel, “Close Your Eyes, Hold Hands,” was published this summer.)