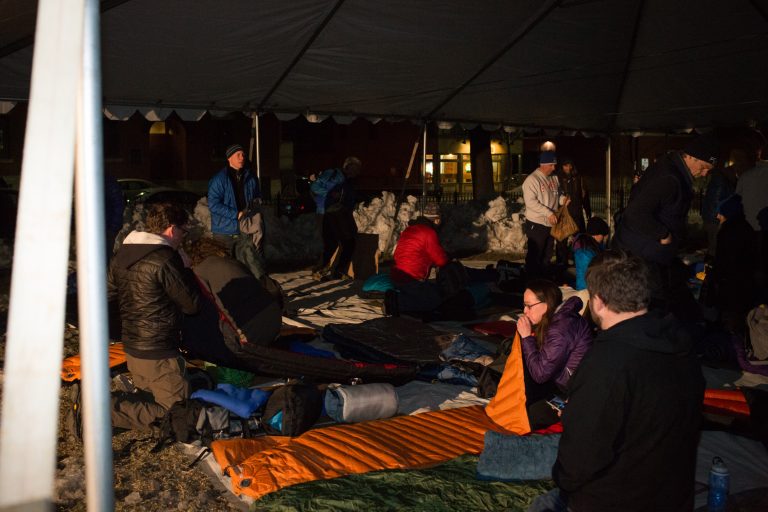 Mark Redmond had been trying – and failing – to get some sleep since ten-thirty at night. He was on the front lawn of the Unitarian Church at the north end of Burlington, Vermont’s Church Street, curled up in his sleeping bag against the March cold, a flattened cardboard carton between him and the snow. It was nearing three in the morning and he was just drifting off, when he was jolted awake by a long, loud crash. A half minute later there was another. Soon after that, there was a third. The noise was nearing.

“I looked up,” Redmond recalled, “and it was some poor guy pushing his shopping cart down Pearl Street and going from pail to pail to find empties. I was hearing the sound of the cans and bottles as they rattled into the cart.”

Redmond’s point? “It’s not just the cold that makes it hard to get a decent night’s sleep if you’re outside. It’s the noise. It’s the lights. And you are just so vulnerable.”

Redmond himself is not homeless. He is the Executive Director of Spectrum Youth and Family Services. But later this month, on the night of March 26, once again he will be hunkered down in his sleeping bag, outside on the north end of Church Street. And he won’t be alone. There will be somewhere around 100 Vermont business and community leaders sleeping outside – or, to use the parlance of the street, “sleeping rough” – all of them getting a small taste of what it is like to be homeless. Among them? Burlington Mayor Miro Weinberger. They will also be raising money for Spectrum, taking pledges in much the same way that others raise money for Special Olympics in the Penguin Plunge.

This March marks the fourth time that Spectrum has held its Sleep Out in Burlington. In addition, between March 26 and March 29, there will be groups of students sleeping rough across Vermont, also raising money for Spectrum and getting an inkling of how hard it is to be homeless. Last year, the Sleep Out raised $200,000.

Spectrum’s mission is to help teens in trouble. Last year it helped 1,200 kids in a variety of programs: counseling, mentoring, health care and drug treatment, among them. The organization is known for its overnight shelter and drop-in center on Pearl Street, but homelessness is only one problem it tries to combat. “I view most of our programs as prevention,” Redmond said. So why the Sleep Out? “Because,” Redmond explained, “It really is awful to be homeless. To endure it for even one night is an experience.”

Indeed. Mary Lee, an associate vice president in Human Resources at Champlain College, was among the participants of the Sleep Out the very first year. Afterward she wrote Redmond an email and observed, “I kept imagining what it might be like for a 15 year old to be all alone with those sounds and cold night after night. At any point, I knew that I had an option and that in just a few hours I would have hot coffee, food, my car, a shower, the day off, the weekend playing with my family, etc.  Easy for me.  Not easy for that 15 year old. Life twists in ways that we often cannot understand.  Homelessness could touch anyone.”

I’ve often written about kids who Spectrum has helped over the years. I always find myself moved and impressed, which is why I keep coming back to their stories. The Sleep Out is a chance to glimpse their world – and to see why as grownups we have to care.

Want to be a part? Visit www.spectrumvt.org for details on how to join the Sleep Out or sponsor someone who is sleeping rough. Are you a student or teacher around the state and want information on how to hold a Sleep Out in your school or community? Email Mark Redmond directly at .

(This column appeared originally in the Burlington Free Press on March 8, 2015. “Close Your Eyes, Hold Hands,” Chris’s most recent  novel, is about a homeless teen. It arrives in paperback in May.)