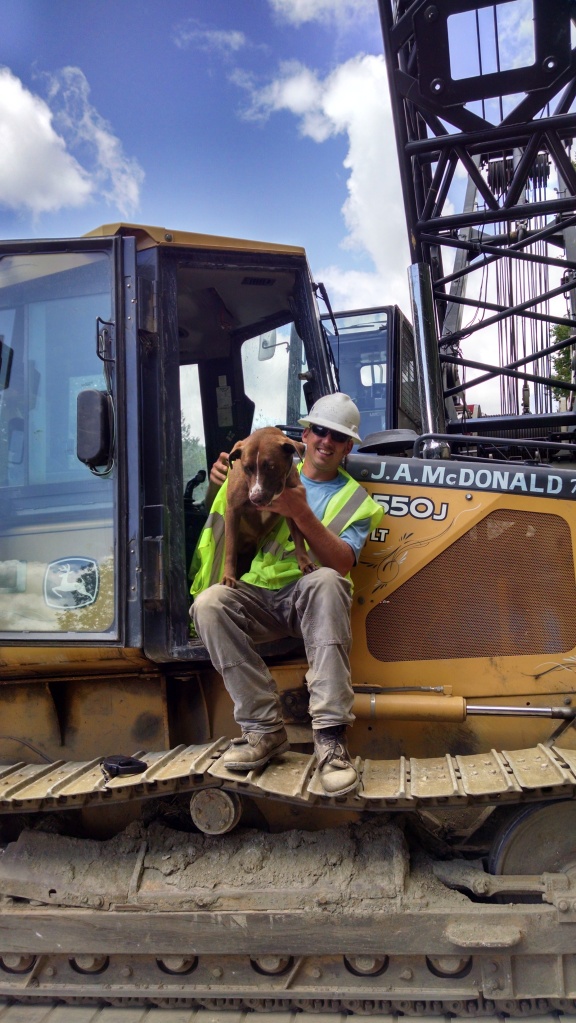 If you really want to understand Vermont, spend a little time with Georgia. Georgia is a 65-pound pit bull and chocolate Lab mix — a classic rescue mutt — with a wattle under her neck that could double as a change purse, but makes her no less endearing. Earlier this week, she spent two hours in the driver’s seat of one of the bulldozers constructing a new bridge here in Lincoln. The smart money said she was there hiding from the thunder that had rolled in late that morning, but her owner remains convinced she was working on her CDL: her commercial driver’s license.

Georgia’s owner is my friend and neighbor Nancy Stevens. Nancy has been in this column a lot over the past quarter century. She is the state’s first female private detective, was at different times my daughter’s preschool and Sunday School teacher, and has served the town as a selectperson, delinquent tax collector, town meeting moderator, and justice of the peace. She also, once upon a time, had llamas, which were only a problem when the mother needed to be milked because her baby insisted on trying to nurse from a barn beam. (Nancy eventually did break the baby’s addiction to pumpkin pine — with the help of another neighbor who happened to have a thousand-pound Scottish Highlander Hereford Cross beef cow as a pet, and was able to milk the mama llama until Barn Baby was willing to enjoy his llama manna straight from the source.)

In any case, Georgia is now the official mascot for Nancy’s Sunday School class at the church here in Lincoln, but she is also one of the unofficial animal ambassadors for the whole town. How well is she recognized? One of our mail carriers, Stan Bigelow, will give her a ride when he is delivering mail, bringing her three miles from the Stevens home to her pal Bella the Dog’s house in the center of town. Local builder Averi Smith has also served as an informal canine cab for Georgia, again carting her to her buddy, Bella.

And, of course, last week, she wound up in that bulldozer, and for a day became the mascot for the J. A. McDonald construction team building the new bridge across the New Haven River. “This one guy said to me that it was the funniest thing you ever saw,” Nancy told me. “Georgia jumped right into the bulldozer like it was her own vehicle.” The next day, Nancy baked the crew M&M cookies to thank them for dog-sitting Georgia through the thunderstorm.

My sense is that Lincoln is not unique. There are perhaps dozens of villages like it in Vermont, places still small enough that the people facilitate play dates between dogs, and don’t mind when one wants to help construct a new bridge.

But it runs deeper here. Much deeper. Nancy may have given a lot to this town, but she feels the town has given her far more in return. During her second bout with cancer in the early 1990s, while one of her children was a toddler and one was in preschool, five nights a week for six months people brought her family dinner. “We called it the chemo casserole parade,” she recalls. Two years ago when those children, now grown, were both going to be away for Christmas, she returned home after the Christmas Eve service at the church to her quiet, empty house, and found a massive Christmas stocking hanging beside her fireplace filled with dozens of “wild, wacky gifts.” (It took a little gumshoe work on her part to find out who the elves were, but eventually she did.)

“The town has changed in the last 30 years, but the spirit of community here hasn’t,” Nancy said. “Lincoln is not a drive-through town. If you’re coming through Lincoln, you’re coming to Lincoln. You get a flat tire here, and four people will drive by and offer to help.”

Indeed. It’s probably why Nancy and Georgia feel right at home in these hills.

(This column appeared originally in the Burlington Free Press on August 9, 2015. There are now four Idyll Banter columns remaining. After 23 and a half years, Chris will be filing his last column on Sept. 6. The paperback of his most recent novel, “Close Your Eyes, Hold Hands,” was published this summer.)