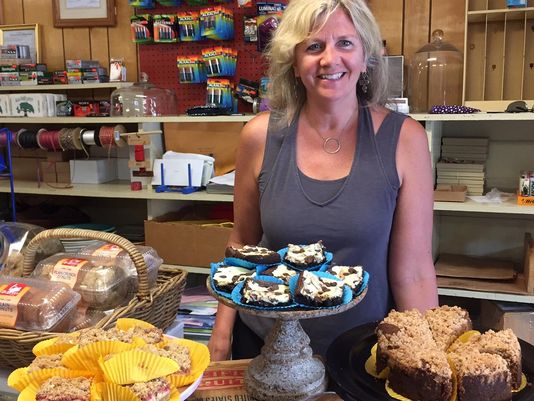 Vaneasa Stearns, owner of the illustrious Lincoln General Store here in Lincoln, Vermont, has been in this column a lot over the 23 years I have been writing Idyll Banter. Her most recent appearance that was more than a mere cameo was two summers ago, on her and her husband’s 25th wedding anniversary. I chronicled how the pair had been the definition of teenagers in heat in their youth: when Vaneasa was17, she had walked 19 miles on a scorching summer day to be with the love of her life.

But I have written mostly about her store. Why? It is a wonderful, eccentric emporium, with sumptuous, creative baked desserts and an extensive selection of wine. Vaneasa will have owned the store for 24 years this October, even longer than I have been writing this column, and she has been a firsthand witness to the way the Green Mountains have changed in the last quarter-century. And make no mistake, we have changed. Lincoln has changed. And so I thought I would check in with Vaneasa this summer and get a sense of what she has seen from the front lines — aka, the front register of a country store in rural Vermont.

“Lincoln used to be a very tough town,” she recalled. “I had my first sip of beer on the grounds of the Lincoln Elementary School — when I was going there. But we’re not so tough anymore. Real estate is a lot pricier. There are so many more second homes. The school has gotten a lot better. You want to see change? Just look at all the wine and expensive microbrew beers we sell now.”

Vaneasa also used to dispatch emergency 911 and fire calls. Prior to the Internet and the cell phone, her store was the communications hub for the village, whether it was to help alert volunteer firefighters that there was a blaze somewhere in the community or because a local was traveling and needed someone to milk (yes, milk) her llama. “I miss those days,” Vaneasa admits. “I’ll see the fire trucks and wonder where they’re going.”

But she has not lost the connection with the community. She has seen a whole generation of kids grow up. “I’ll never forget one boy telling me when he was waiting for the bus outside the store, ‘I like you. I’m not going to steal from you.’ He’s a homeowner here now. He has a family of his own. He’s a great guy, he’s helped run this town.”

And she understands that her presence in the store day-after-day – the sheer continuity – has made her a mother confessor of sorts. She hears about the marriages in trouble, the romances on the rocks. She sees the depression and the loss. “A lot of people feel comfortable with me. They know I hold their secrets,” she says. “And if there is one thing this store has taught me, it’s this: don’t judge people. Don’t jump to conclusions. There’s always a lot more to a person’s story than meets the eye.”

She adds that she and her husband don’t have a television because she has “enough drama and comedy everyday right here at the store.”

And she insists that she loves the job every bit as much now as she did 24 years ago. She feels this way despite the occasional burglaries, the unfortunate souls who show up shirtless and shoeless on drugs, and the reality that the store is open 77 hours a week – seven a.m. to six p.m., every single day – regardless of whether there is electricity and regardless of the weather. She opens even when a blizzard is enveloping the hill town.

Sometimes when I’ve been there buying one of their amazing brownies, I’ll see a visitor from New York or New Jersey. And I’ll witness one of my neighbors race past the front register holding up a gallon of milk and calling out to Vaneasa to put it on his or her tab. The out-of-towner will look at Vaneasa and then at me in disbelief. That’s not how business is done at a deli on Lexington Avenue. But it’s a business model that has worked in small towns like Lincoln for generations and – despite the changes in Vermont – it works even now.

“I love what the store means to people,” Vaneasa told me. “It’s a privilege to be here day after day.”

(This column appeared originally in the Burlington Free Press on July 12, 2015. The paperback of Chris’s most recent novel, “Close Your Eyes, Hold Hands,” was published this summer.)