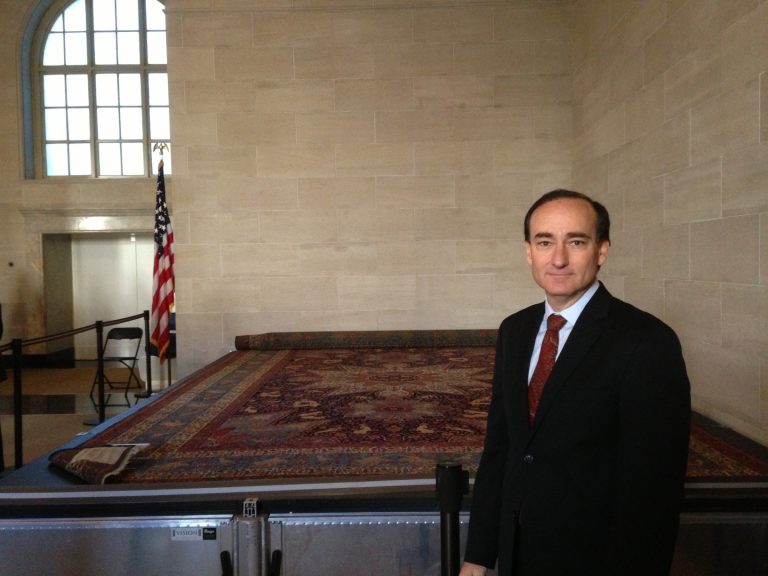 You know your moral compass is a little off when you censor a story about a gift to a U.S. president from a group of orphans — even though that story makes your grandparents and great-grandparents look like Mother Teresa.

But this is essentially what the White House Visitor Center did for six days in November. After a year of congressional pressure and the pleas of Armenian-Americans, the White House pulled the Ghazir Orphan Rug from storage and allowed us to see it — but swept under the rug an explanation for its origins.

On the surface, it’s hard to understand why it should have taken such a Herculean effort to allow the rug to see daylight in the first place. Here is the abridged story of the carpet. During the First World War, the Ottoman Empire systematically annihilated 1.5 million of its Armenian citizens, ethnically cleansing its Armenian minority from almost all of what today we call Turkey. Three out of every four Armenians living in the Ottoman Empire were killed. Americans were horrified by the slaughter as it was occurring, and a newly organized American group, Near East Relief, tried to save the survivors of the genocide — including the children, scattered now across the Middle East. The group’s accomplishments, especially the 135,000 orphans it cared for, were breathtaking.

And among the thanks to America from those orphans was … the rug. It was woven by a group of Armenian orphan girls from the orphanage in Ghazir, Syria (now Lebanon) and designed to be worthy of a world leader. It was. It’s massive and beautiful. It was presented to President Coolidge on Dec. 4, 1925. A year later, two of the Armenian girls who helped weave the rug journeyed to Washington and met the Vermont-born president.

Cut to the autumn of 2013. The Smithsonian Museum asked the White House for the rug so it could be displayed. Hagop Martin Deranian had written a book, “President Calvin Coolidge and the Armenian Orphan Rug,” and there was talk of an event. The White House said no. They wouldn’t release the rug. The event was “not viewed as commensurate with the rug’s historical significance,” said National Security Council spokeswoman Laura Lucas Magnuson at the time.

The real reason was likely real politik: We did not want to antagonize Turkey, which, despite all historical evidence, continues to deny the reality of the Armenian Genocide. So even though the rug was a testimony to American ideals at their very best, it was better to let the thing sit and molder.

In the last five months, however, Turkey hasn’t played nice with the U.S. in the Middle Eastern sandbox and our relationship has been strained. So, how did we express our frustration with our ally? For six days in November we trotted out the Orphan Rug. We listened to the appeals of House Representatives — and Armenian-Americans.

But we didn’t want to push this too far, so we put this extraordinary rug in a corner of the White House Visitor Center, rather than the Smithsonian Museum.

And we certainly didn’t use the word genocide in any of the materials explaining why the rug matters. The caption explains simply that it was made by girls “orphaned during World War I.” It was given as an endorsement of “Golden Rule Sunday.” There is no explanation of why the girls were orphaned. Could have been a factory fire. And there was obviously no mention of the 1.5 million dead.

And so as I stood before the rug the other day at the Visitor Center, I was at once moved and enraged. I’m a descendant of survivors of the Armenian Genocide, and the rug’s existence is a reminder of that cataclysmic period in my people’s history when we were nearly erased from the globe. The rug in this regard will always hold totemic power for me. But I was frustrated by the censorship — at the way the rug was made a pawn in power politics. I was saddened that the accomplishments of Near East Relief were not celebrated.

Next April marks the centennial of the start of the Armenian Genocide. I hope the rug will be set free once again, and this time the story behind it authentically and accurately rendered. The orphans deserve better — as do we.

(This column appeared originally in the Burlington Free Press on December 7, 2014. Chris’s novel of the Armenian Genocide is “The Sandcastle Girls.”)