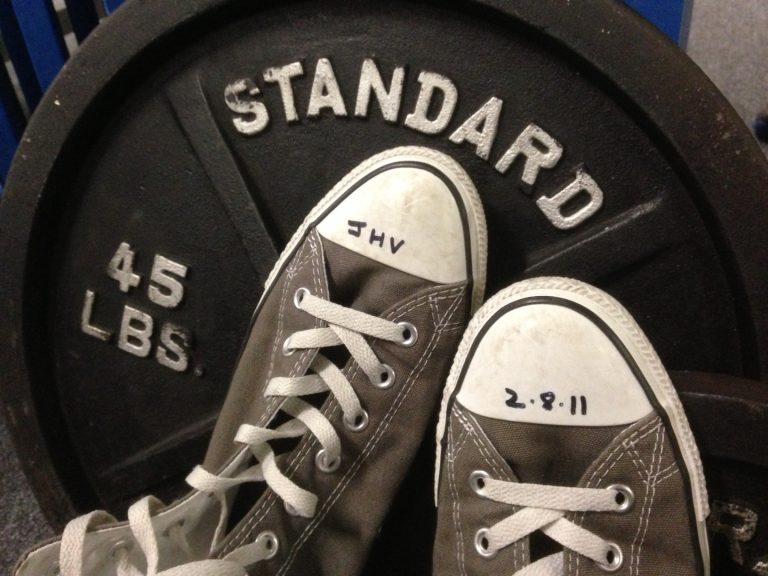 Lincoln’s Andrew Furtsch works out at the gym in Bristol in a pair of ratty Converse high tops. On the white toecap of one he has written in permanent black marker, “J.H.V.” On the other he has penned “2.8.11.”

It was four years ago today that our friend John Henry Vautier passed away: February 8, 2011. A man who survived two battles with cancer and a National Guard deployment in Bosnia died when he fell clearing snow off his roof in New Haven. Andrew and I worked out with him two and sometimes three times a week at Bristol Fitness. Andrew and John used to dead-lift together, squatting and hoisting refrigerators off the floor. (Okay, that’s an exaggeration. They weren’t really lifting refrigerators. They were lifting golf carts.)

Andrew will never forget his last conversation with John. They had finished working out for the day and were walking down the alley that leads to the gym, and John said, “I gotta get a big tub of gum for the kids. See you next time.” John used to teach Sunday School at the United Church of Lincoln, and a big part of the curriculum he improvised for the four- and five-year-olds in his care involved giving them chunks of Dubble Bubble. It worked. The kids adored the hulk of a man that was John Vautier and knew they were loved in return.

But, of course, there wouldn’t be a next time for Andrew and John. It snowed and John climbed a ladder, and his story ended a lot sooner than any of us expected.

It’s still hard for me to believe that John has been gone four years now. I was on a book tour the day he died, but I know right where I was when I learned what had happened. I know the precise spot in the hotel lobby in Austin, Texas where I was standing when Andrew called me with the news. Andrew said – because, it seems, people really do say this when we are breaking unbelievably bad news – “Are you sitting down?” I was about to check in, but I went to a leather couch and sat down, just as Andrew had instructed. I ended the book tour early and came home.

Obviously a big part of living is dying. Not simply the reality that all our stories end there. I am referring to the fact that sometimes our friends and family leave us much earlier in the journey than we anticipate. And in most ways, we move on. We have to.

Yet even four years after John died, I don’t enter the gym without thinking of him. Clearly Andrew doesn’t either: he can’t put on his sneakers without recalling the man. “I always think of that booming voice of his,” Andrew said to me the other day. “I think of that big smile on his face. Not a lot of people have that demeanor.”

Lord, I can’t even change the halogen bulb in my desk lamp without thinking of John, because he was an electrician and used to make the bulbs magically appear whenever I needed one. Now that finding the bulb is my responsibility, it’s a scavenger hunt to hardware stores in two counties before I find the right one.

Last month I heard Tony Dokoupil, author of the memoir, “The Last Pirate,” on “Fresh Air.” While answering one of Terry Gross’s questions, he said something that has stayed with me: “Memory is like surveillance footage. Everything gets picked up, but you don’t really review it unless there’s an incident.”

Indeed. And for those of us who knew John from the gym or the church or from Cubber’s Restaurant in Bristol, that surveillance footage is a gift. There was an incident: a cataclysmically awful incident. But thank God for the memories we have of John. Even though he has been gone four years, we still have inside us those reminders of his laughter, his exuberance, and – best of all – his friendship.

We still miss you, buddy. I hope you’re lifting some crazy weights in heaven.

(This column appeared originally in the Burlington Free Press on February 8, 2015. Chris’s new novel, Hour of the Witch, arrives on May 4, 2021.)