Chris Bohjalian is the #1 New York Times bestselling author of 24 books. His work has been translated into 35 languages and become three movies and an Emmy-nominated TV series. 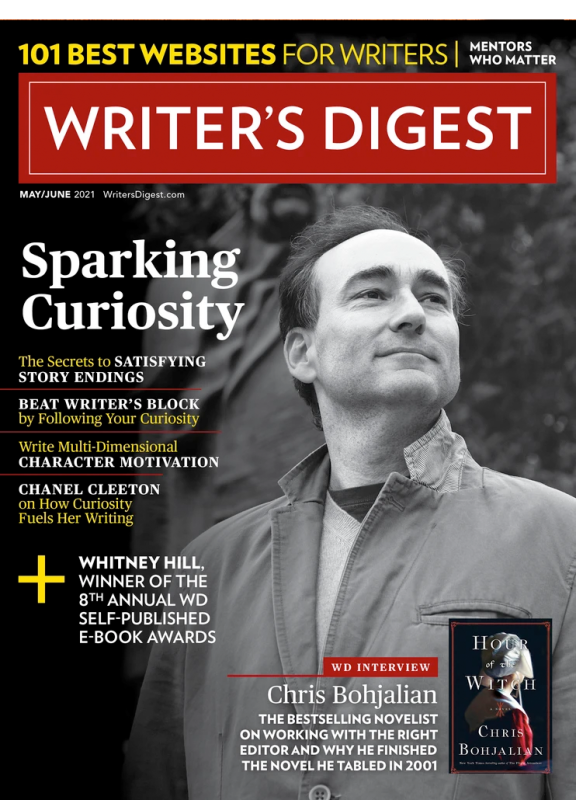 His new novel, THE LIONESS is now on sale. It ss already in development for a limited TV series from e One and Marsh Entertainment. A luxurious African safari turns deadly for a Hollywood star and her entourage in this riveting historical thriller, about which the New York Times wrote in its spring preview, “Bohjalian steers this runaway Land Rover of a story into some wildly entertaining territory.” The Boston Globe wrote, “Bohjalian, one of our finest storytellers, weaves his spellbinding magic.”

Jodi Picoult said, “THE LIONESS feels like the best possible combination of Hemingway and Agatha Christie — a gorgeously written story about the landscape and risks of Africa, whose edge-of-your-seat plot makes it impossible to put down. Bohjalian just gets better and better.”

His 2021 novel, HOUR OF THE WITCH, is now on sale as a paperback. It’s a tale of historical suspense set in 1662 Boston, a story of the first divorce in North America for domestic violence — and a subsequent witch trial. Diana Gabaldon in her review in the Washington Post called it “historical fiction at its best.” Danielle Trussoni in the New York Times called it “harrowing.”

His 2020 novel, “The Red Lotus,” is a twisting story of love and deceit: an American man vanishes on a rural road in Vietnam and his girlfriend, an emergency room doctor trained to ask questions, follows a path that leads her home to the very hospital where they met, and is also in development for a TV series. In the New York Times, Sarah Lyall called it, “Terrific. . .[an] elegant noose of a plot. . .Bohjalian is a pleasure to read. He writes muscular, clear, propulsive sentences. . .As suspenseful as it is, The Red Lotus is also unexpectedly moving — about friendship, about the connections between people and, most of all, about the love of parents for children and of children for parents. Bohjalian is a writer with a big heart and deep compassion for his characters.”

He is also a playwright and screenwriter. He has adapted his novel, “Midwives,” for a play, which premiered January 21, 2020 at the George Street Playhouse, and was directed by David Saint. Broadway World said of it, “The fine playwriting by Bohjalian, the directorial talents of the Playhouse’s Artistic Director, David Saint, and the show’s accomplished cast make this play unforgettable.”

His first play, “Grounded,” premiered at the 59 East 59th Theatres in New York City in the summer of 2018 and is now available as an audiobook and eBook, “Wingspan.”

His books have been chosen as Best Books of the Year by the Washington Post, the St. Louis Post-Dispatch, the Hartford Courant, the Milwaukee Journal-Sentinel, Publishers Weekly, Library Journal, Kirkus Reviews, Bookpage, and Salon.

His awards include the Walter Cerf Medal for Outstanding Achievement in the Arts; the ANCA Freedom Award for his work educating Americans about the Armenian Genocide; the ANCA Arts and Letters Award for The Sandcastle Girls, as well as the Saint Mesrob Mashdots Medal; the New England Society Book Award for The Night Strangers; the New England Book Award; Russia’s Soglasie (Concord) Award for The Sandcastle Girls; a Boston Public Library Literary Light; a finalist for the Lambda Literary Award for Trans-Sister Radio; a Best Lifestyle Column for “Idyll Banter” from the Vermont Press Association; and the Anahid Literary Award. His novel, Midwives,was a number one New York Times bestseller, a selection of Oprah’s Book Club, and a New England Booksellers Association Discovery pick. He is a Fellow of the Vermont Academy of Arts and Sciences.

He has written for a wide variety of magazines and newspapers, including The New York Times, The Washington Post, Cosmopolitan, Reader’s Digest, and The Boston Globe Sunday Magazine. He was a weekly columnist in Vermont for The Burlington Free Press from 1992 through 2015.

He lives in Vermont with his wife, the photographer Victoria Blewer.

Their daughter, Grace Experience, is a young actor in New York City. Among the audiobooks she has narrated all or part of are Hour of the Witch, The Flight Attendant; Close Your Eyes, Hold Hands; The Lioness; and The Guest Room.