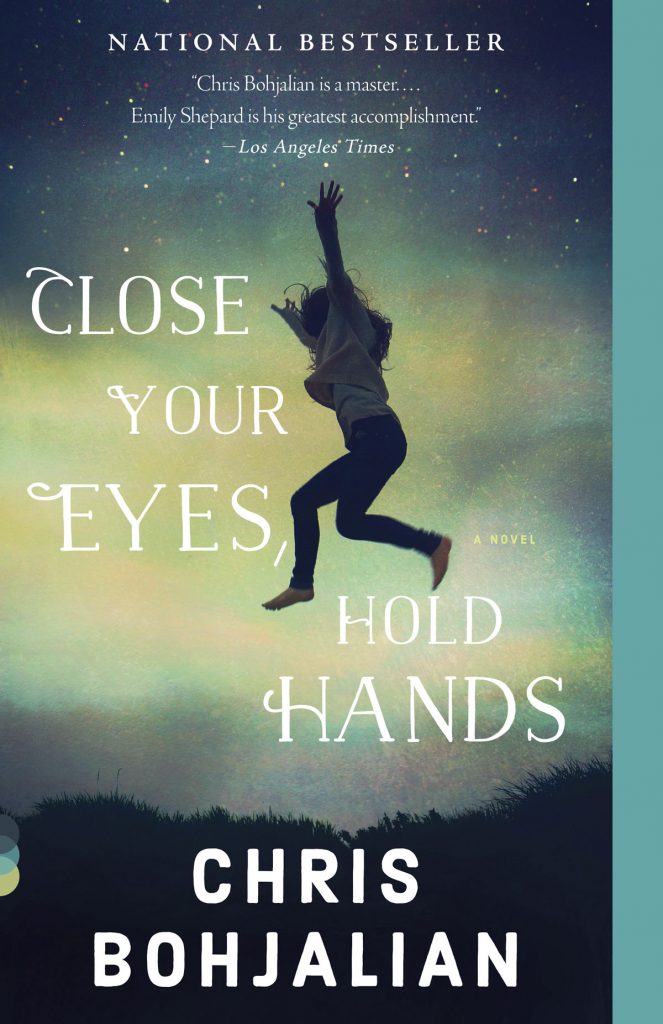 A St. Louis Post-Dispatch Best Book of the Year

A Milwaukee Journal Sentinel Best Book of the Year

A Library Reads Top Ten Books of the Month

A heartbreaking, wildly inventive, and moving novel narrated by a teenage runaway, from the bestselling author of Midwives and The Sandcastle Girls.

Close Your Eyes, Hold Hands is the story of Emily Shepard, a homeless teen living in an igloo made of ice and trash bags filled with frozen leaves. Half a year earlier, a nuclear plant in Vermont’s Northeast Kingdom had experienced a cataclysmic meltdown, and both of Emily’s parents were killed. Devastatingly, her father was in charge of the plant, and the meltdown may have been his fault. Was he drunk when it happened? Thousands of people are forced to flee their homes in the Kingdom; rivers and forests are destroyed; and Emily feels certain that as the daughter of the most hated man in America, she is in danger. So instead of following the social workers and her classmates after the meltdown, Emily takes off on her own for Burlington, where she survives by stealing, sleeping on the floor of a drug dealer’s apartment, and inventing a new identity for herself — an identity inspired by her favorite poet, Emily Dickinson. When Emily befriends a young homeless boy named Cameron, she protects him with a ferocity she didn’t know she had. But she still can’t outrun her past, can’t escape her grief, can’t hide forever — and so she comes up with the only plan that she can.

A story of loss, adventure, and the search for friendship in the wake of catastrophe, Close Your Eyes, Hold Hands is one of Chris Bohjalian’s finest novels to date — breathtaking, wise, and utterly transporting.

Watch the TV Commercial for Close Your Eyes, Hold Hands

Listen to a teaser for Close Your Eyes, Hold Hands Audiobook!

[zoomsounds_player artistname="Chris Bohjalian" songname="Close Your Eyes, Hold Hands" type="audio" dzsap_meta_source_attachment_id="3905" source="https://chrisbohjalian.com/wp-content/uploads/2019/05/close-eyes.mp3" thumb="https://chrisbohjalian.com/wp-content/uploads/2016/08/closeyoureyes-holdhands600.jpg" config="default" cover="https://chrisbohjalian.com/wp-content/uploads/2016/08/closeyoureyes-holdhands600.jpg" autoplay="off" loop="off" open_in_ultibox="off" enable_likes="off" enable_views="off" play_in_footer_player="off" enable_download_button="off" download_custom_link_enable="off"]
Would you like to hear more?
Instant download of the audiobook from any of these sellers:
• Amazon
• Barnes & Noble
• Books A Million
• IndieBound
• Powell’s
• Walmart
• Penguin Random House
“I have a new favorite Chris Bohjalian novel. Close Your Eyes, Hold Hands is a book I wish I’d been smart enough to write: a masterpiece of narrative voice, of emotion, and of how — as Emily Dickinson might say — the sparest of words can hold a wealth of pain. If you need any proof that fiction can scare us, move us, and break our hearts simultaneously — look no further.”

“Close Your Eyes, Hold Hands, Chris Bohjalian’s terrific new novel, could serve as a master class on how to write the thinking reader’s bestseller. Suspenseful, provocative, often terrifying yet compassionate. . .all while creating one of the most memorable teenage protagonists in recent fiction. . .Moving, hopeful and grounded in the everyday, and as heartbreaking as the inspiration for the novel’s title.”

“Chris Bohjalian is a master of depicting the small moments — the inevitable routines — that follow in the wake of a trauma. . .Emily Shepard is Bohjalian’s greatest accomplishment — when you turn the final page you will relish her real-ness and wonder if that twinge of disquiet will ever go away.”

“A chilling and heartbreaking suspense novel for readers who like the poetry of Emily Dickinson. That may sound like a literary mash-up — the 19th-centrury belle of Amherst, Mass., meets a 21st-century nuclear meltdown — but Close Your Eyes, Hold Hands is ambitious and poignant thanks to the voice of its teen narrator. . .It’s a novel about survival and the power of literature and poetry.”

“A compelling tale of loss, resilience, and transformation. . .a page-turning intensity.”

“Bohjalian’s inventive latest imagines a nuclear meltdown in Vermont. Sixteen-year-old Emily loses her father — the plant’s chief engineer — in the accident, and she flees the town to escape its vitriol. Though she ends up homeless, she never gives up on home. Emily’s voice is droll, her journey enthralling and indelible.”

“A ‘must read’ book. . .a brilliant story of a young woman living an unexpected life, making difficult decisions and dealing with an ugly aftermath.”

“Heartbreaking. . .scrupulously realistic. . .Close Your Eyes, Hold Hands is a novel for adults. . .but readers of any age who love John Green’s novels might also find Shepard’s story, sobering as it is, an awesome one.”

“Stirring, sensitive. . .one of the most authentic and distinctive voices since Emma Donoghue’s Jack, the unforgettable 5-year-old boy who dazzled readers and critics alike in the remarkable 2011 novel, ‘Room.'”

“Bohjalian delivers a thoroughly engrossing and poignant coming-of-age story set against a nightmarish backdrop as real as yesterday’s headlines from Fukushima and Chernobyl. And in Emily, he’s created a remarkable and complicated teenager, a passionate, intelligent girl equally capable of cutting herself with a razor blade and quoting Emily Dickinson, then explaining it all to us in a wry, honest voice as distinctive as Holden Caulfield’s.”

“Bohjalian’s novels. . .are intelligent, rich in detail, filled with full-blooded characters. And Close Your Eyes, Hold Hands is Bohjalian at his finest.”

“A powerful metaphor for a 16-year-old girl who has lost everything. . .haunting and resonant. . .Bohjalian has long endowed his characters with a spark of humanity, even in the midst of brutality.”

“Emily’s character is written so well and her story so absorbing (this is very much a read-in-one-or-two sittings type of book) that it is easy to forget you’re actually reading. . .Close Your Eyes, Hold Hands reminds us of our innate need for connection.”

“Mesmerizing and insightful. . .Bohjalian creates a story that reminds us just how fragile life is and how powerful relationships can be when set against the backdrop of struggle. This is pure beauty in book form.”

“Riveting. . .In Emily, Bohjalian has created one of his most engaging, convincing characters. Her teenage voice in all its fear, despair and deeply buried strength shines through to the book’s bittersweet end.”

“Bohjalian once again reveals an uncanny talent for crafting a young female protagonist who is fatally flawed, but nevertheless immensely likable. . .Close Your Eyes, Hold Hands resonates with a message of hope, truth and the fragility of life.”

“A masterful storyteller. . .Bohjalian hits every note. His characters have depth, his story sings. It’s a book that works well for either teens or adults.”

“Heartbreaking and frightening. . .The book rings with poetry and truth.”

“Wrenching. . .Emily’s voice is a compelling one. . .and hers is a journey readers will avidly follow.”

“Chris Bohjalian has created a heartbreaking and memorable story with a protagonist every reader will be rooting for. Emily finds her solace in the words of Emily Dickinson, while we will find satisfaction in watching her attempt to recover all that she has lost.”

“A potent story of loss, hope, and the overpowering yearning for home — even if home has turned into a pile of radioactive materials, bittersweet memories, and an aging dog.”

“I’d forgotten how perfectly Bohjalian takes on character, how attentive he is to every idiosyncrasy and how, in spite of the heavy matter, is never precious or sentimental. I remember now. . .having read the disturbing and beautifully written Close Your Eyes, Hold Hands.”

“Bohjalian’s impressive 16th novel charts the life of a teenage girl after a nuclear disaster. . .Through her first-person narration, readers become intimately familiar with Emily. . .Her admiration for kindred spirit Emily Dickinson serves to humanize her plight, as does an epiphany in the book’s bittersweet conclusion.”

“A story that feels like it could be ripped out of the headlines. . .Bohjalian’s regular readers will find the same masterful storytelling they have come to expect, and the realistic and captivating narrator may attract a a new audience just graduating from the ranks of teen fiction.”

“A dystopian nightmare entwined with a wrenching personal crisis. . .The notion of ‘just a life’ grows more intense for somebody like Emily Shepard who can’t return and is unsure about how to go forward.”

“Chris Bohjalian thrives on dread. . .the ever-present feeling that something is or is about to be terribly wrong.”

“In his sixteenth novel, the versatile Bohjalian has Emily telling her harrowing, tragic story retrospectively. . .[A] brave saga.”

“More heartfelt, engaged work from relentlessly best-selling, best-book author Bohjalian, and how can you not love a heroine who identifies with Emily Dickinson?” 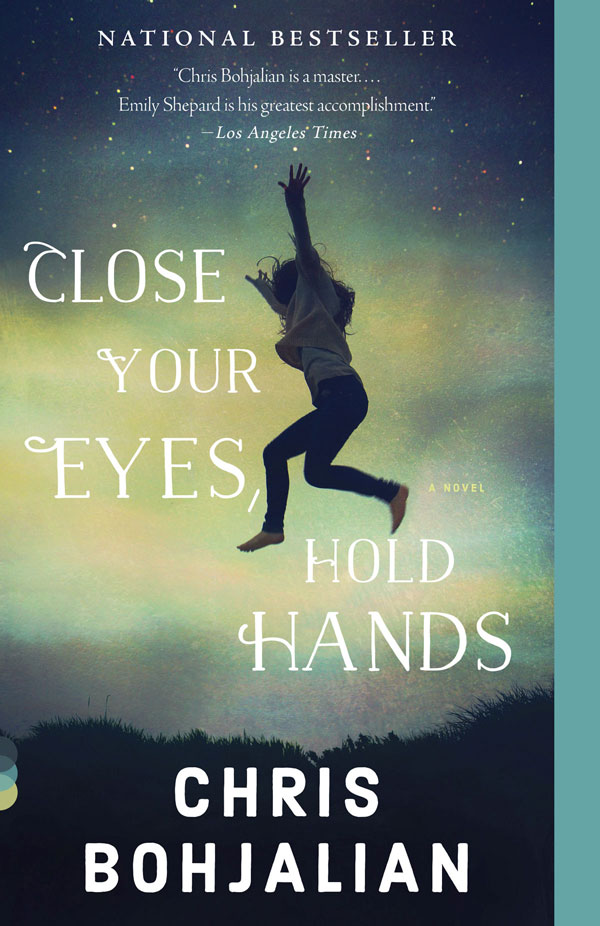