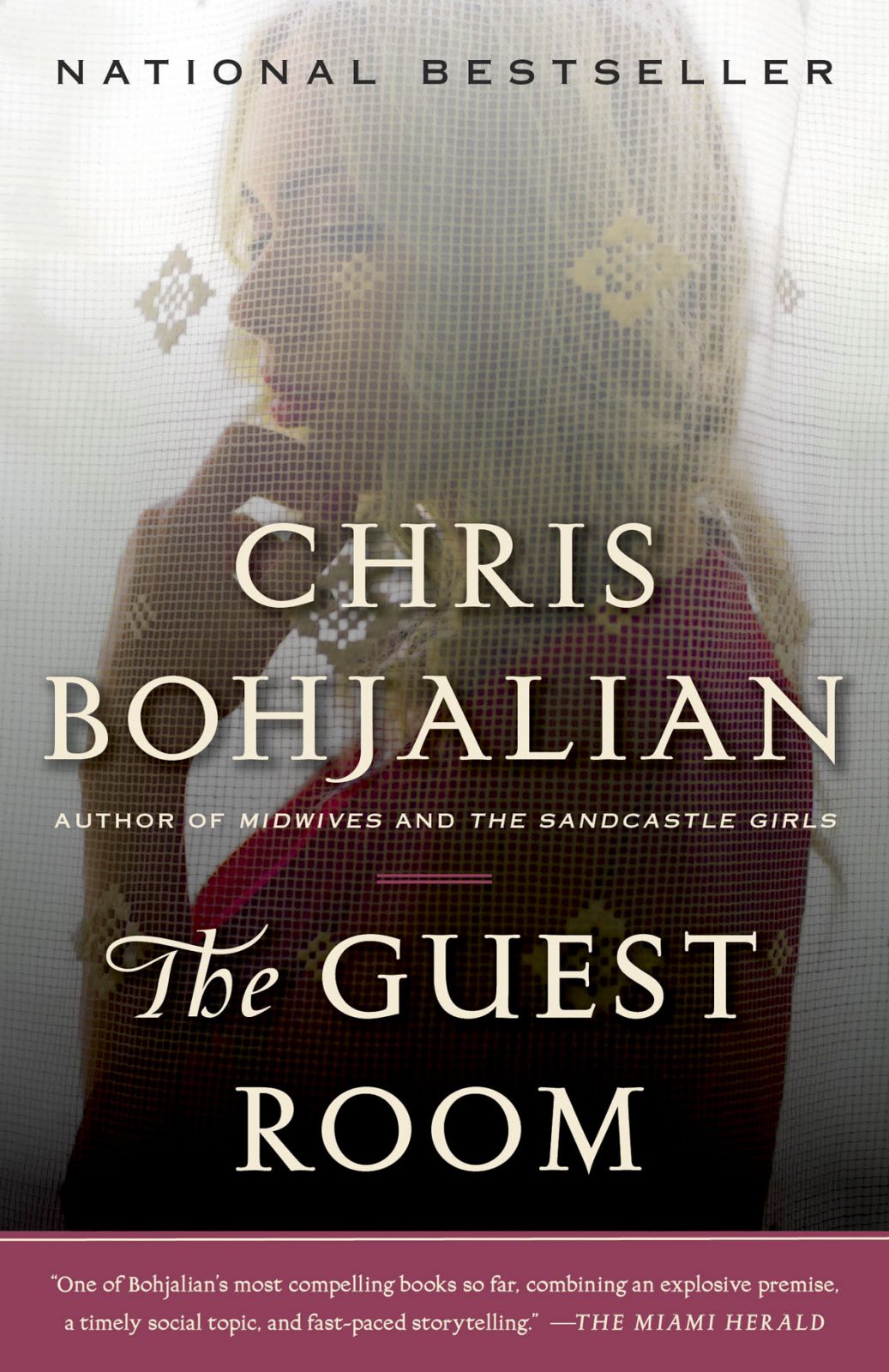 From the New York Times bestselling author of Midwives and The Sandcastle Girls comes the spellbinding tale of a party gone horribly wrong: two men lie dead in a suburban living room, two women are on the run from police, and a marriage is ripping apart at the seams.

When Kristin Chapman agrees to let her husband, Richard, host his brother’s bachelor party, she expects a certain amount of debauchery. She brings their young daughter to Manhattan for the evening, leaving her Westchester home to the men and their hired entertainment. What she does not expect is this: bacchanalian drunkenness, her husband sharing a dangerously intimate moment in the guest room, and two women stabbing and killing their Russian bodyguards before driving off into the night.

Those women? Two 19-year-olds from Armenia, abducted as teenagers, held captive as sex slaves in Russia throughout their adolescence, and then brought to New York City where the captors know their value as sexual assets will soar.

In the aftermath, Kristin and Richard’s life rapidly spirals into nightmare. The police throw them out of their home, now a crime scene, Richard’s investment banking firm puts him on indefinite leave, and Kristin is unsure if she can forgive her husband for the moment he shared with a dark-haired girl in the guest room. But the dark-haired girl, Alexandra, faces a much graver danger. In one breathless, violent night, she is free, running to escape the police who she fears will arrest her and the gangsters who she knows will kill her.

The novel follows her story as she tries to stay in alive in Times Square and Manhattan with neither credit cards nor a passport — with, essentially, no identity — as well as the entire Chapman family’s saga in Westchester: Richard, Kristin, and 9-year-old Melissa.

A captivating, chilling story about shame and scandal, The Guest Room is a riveting novel from one of our greatest storytellers.

Listen to a teaser for The Guest Room Audiobook!

“Bohjalian is at his best in The Guest Room, one of his most compelling books so far, combining an explosive premise, a timely social topic, and fast-paced storytelling with a purpose.”

Amy Driscoll
The Miami Herald
“The book’s real throbbing heart is Anahit, an aspiring young dancer from Armenia who was tricked into a life of rape and prostitution that brought her to Richard’s home. The narrative steadily and masterfully slinks away from Richard and over to Anahit, and in her chapters we discover a deep portrait of a brutalized and manipulated young woman. . .The narrative’s frequent somersaults from Anahit’s devastating backstory to the Chapman family’s more sheltered world is a remarkable artistic feat. . .a steely exploration of the very human cost of bachelor parties and other games of male pleasure.”

Eliot Schrefer
USA Today
“The Guest Room has an edge-of-the-seat momentum that propels the reader straight to the last page…For those who value the well-researched novel, the author’s 18th book will please.”

Anita Shreve
The Washington Post
“Heartbreaking. . .I won’t give away of the surprising twists and turns that The Guest Room takes on the path to Bohjalian’s daring conclusion; I’ll only note that much of the pleasure that comes from reading any well-constructed narrative lies in trying to anticipate how the author will write himself out of seemingly inescapable corners. But here, for a change, we also have a novelist who seems more concerned with examining and dramatizing a much more universal question: whether, in the end, any amount of love or compassion, retreat or nobility or forgiveness, can overcome the remorseless workings of evil.”

Skip Horack
The San Francisco Chronicle
“Suspenseful. . .it took all of our willpower to not bite off all of our nails as we tore through this dark thriller.”

Lynsey Eidell
Glamour
“A story both global and intimate. . .heartbreaking.”

Amanda St. Amand
St. Louis Post-Dispatch
“Bohjalian’s deft and light-handed storytelling makes this book a compelling and captivating read. In particular, his treatment of guilt and paranoia is realistic and downright scary. You will remember Richard and Alexandra long after the last page.”

Tracy Sherlock
The Vancouver Sun
“Chris Bohjalian is a master. . .The Guest Room is one of his most daring stories yet. He takes the reader deep into the darkest corners of illicit, international sex-slave trafficking in a riveting story about worlds in collision.”

Frank O. Smith
Portland Press Herald
“The Guest Room is a gripping story about suburban American lives ripped apart when they encounter the evil world of sex slavery. . .It’s hard to put down, or ever forget.”

David Shaffer
Minneapolis Star-Tribune
“Bohjalian’s novel is a tightly constructed, sex-and-violence-driven thriller, but it’s also a check to the convenient ignorance indulged in by American consumers — of entertainment as well as goods.”

Amy Goodfellow Wagner
The Examiner
“A good man’s momentary moral lapse plunges his happy, prosperous life into a nightmare of murderous gangsters and remorseless sex traffickers. Bohjalian’s deftness as a story teller is on full display here, as he couples the urgency of a compulsively readable crime thriller with a quiet meditation on the meaning of family and relationships; the painstaking, quotidian, essential business of how we win love, and how swiftly we can lose it.”

Geraldine Brooks
Pulitzer Prize winning author of March
“The Guest Room pulses quick as a page-turner, but its concerns run deep into the moral consequences following an eruption of violence in ordinary lives.”

Barbara Hoffert
Library Journal
“Well-written and psychologically astute. . .Alexandra is the conscience in this conscienceless world, a girl who manages to hold on to her innocence and compassion despite the horror of her life. Her voice, with its sometimes uncertain, quirky English, is rendered with such perfection that it’s easy to forget that the author is male. This, the book tells us, is what happens to the innocent. . .enjoyable.”

Arlene McKanic
BookPage
“The Guest Room is a page-turner in every sense of the word. From its very first page to an emotionally charged surprise ending, Bohjalian’s fast-paced plot draws readers in and makes the book truly ‘hard to put to down’. . .Remarkable. . .A captivating and insightful read.”

Rupen Janbazian
the Armenian Weekly
“A devilishly good story. And this suspenseful crime novel, imbued with violence, bad decisions and families torn apart, may be Bohjalian’s best one yet.”

Carol Memmott
Book Trib
“It reads like a thriller…I did not see the end coming. Chris does a terrific job of exploring the very dark side of trafficking and the women who are preyed on…Lots to discuss, and book clubs should take note.”