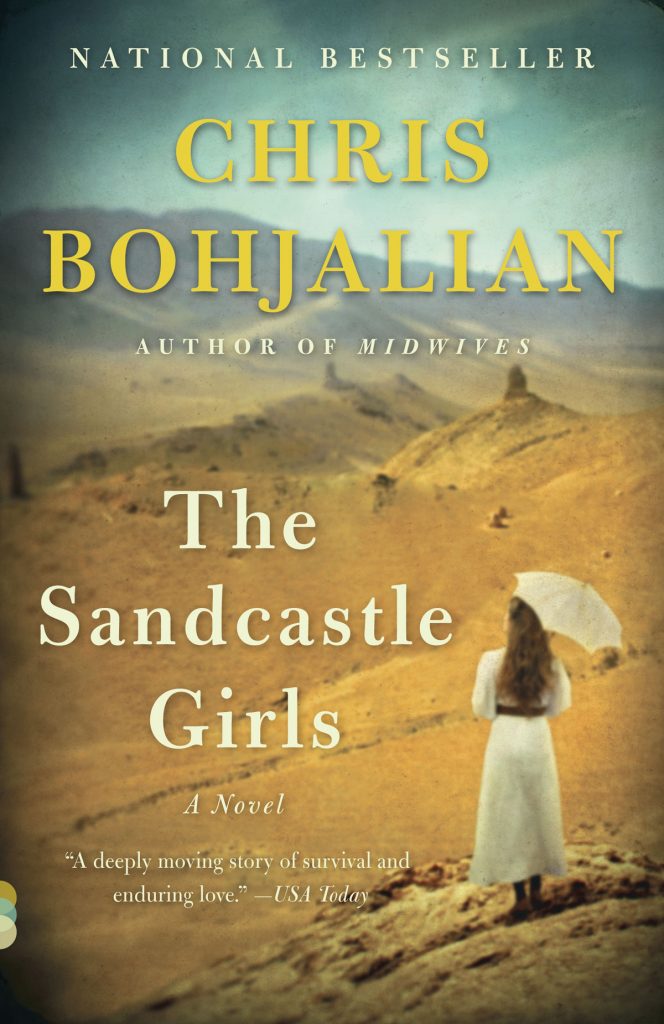 An Oprah.com “Book of the Week”

Awarded Russia’s Soglasie (Concord) Award, the ANCA Arts & Letters Award, and the Saint Mesrob Mashdots Medal by His Holiness Aram I, Catholicos of the Great House of Cilicia

Over the course of his career, New York Times bestselling novelist Chris Bohjalian has taken readers on a spectacular array of journeys. Midwives brought us to an isolated Vermont farmhouse on an icy winter’s night and a homebirth gone tragically wrong. The Double Bindperfectly conjured the Roaring Twenties on Long Island – and a young social worker’s descent into madness. And Skeletons at the Feast chronicled the last six months of World War Two in Poland and Germany with nail-biting authenticity. As The Washington Post Book World has written, Bohjalian writes “the sorts of books people stay awake all night to finish.”

In his fifteenth book, The Sandcastle Girls, he brings us on a very different kind of journey. This spellbinding tale travels between Aleppo, Syria in 1915 and Bronxville, New York in 2012—a sweeping historical love story steeped in the author’s Armenian heritage, making it his most personal novel to date.

When Elizabeth Endicott arrives in Syria she has a diploma from Mount Holyoke College, a crash course in nursing, and only the most basic grasp of the Armenian language. The First World War is spreading across Europe and she has volunteered on behalf of the Boston-based Friends of Armenia to deliver food and medical aid to refugees of the Armenian Genocide. There Elizabeth becomes friendly with Armen, a young Armenian engineer who has already lost his wife and infant daughter. When Armen leaves Aleppo to join the British army in Egypt, he begins to write Elizabeth letters, and comes to realize that he has fallen in love with the wealthy, young American woman who is so different from the wife he lost.

Flash forward to the present, where we meet Laura Petrosian, a novelist living in suburban New York. Although her grandparents’ ornate Pelham home was affectionately nicknamed “The Ottoman Annex,” Laura has never really given her Armenian heritage much thought. But when an old friend calls, claiming to have seen a newspaper photo of Laura’s grandmother promoting an exhibit at a Boston museum, Laura embarks on a journey back through her family’s history that reveals love, loss – and a wrenching secret that has been buried for generations.

Watch the TV Commercial for The Sandcastle Girls

Listen to a teaser for The Sandcastle Girls Audiobook!

“Bohjalian (Midwives) — the grandson of Armenian survivors — pours passion, pride, and sadness into his tale of ethnic destruction and endurance.”

“Bohjalian deftly weaves the many threads of this story back and forth, from past to present, from abuse to humanity, from devastation to redemption. His ability to add irony and wit makes the contrasting horrors even more intense. . .Staggering. . .[and] utterly riveting.”

“A searing, tightly woven tale of war and the legacy it leaves behind. . .A nuanced, sophisticated portrayal of what it means not only to endure, but to insist on hope.”

“It takes a talented novelist to combine fully ripened characters, an engrossing storyline, exquisite prose and set it against a horrific historical backdrop — in this case, the Armenian Genocide — and completely enchant readers. The prolific and captivating Chris Bohjalian has done it all with The Sandcastle Girls.”

A “Great read. . .an affecting tale set at the time of a lesser-known holocaust, 1915’s Armenian genocide.”

“Compelling. . .an eye-opening tale of longing and discovery. . .a bittersweet reflection on hope even in the darkest circumstances.”

“Dead-solid perfect. Bohjalian is a literary novelist unafraid to reference Proust’s madeleine and expect readers to get it. But his books are also filled with artfully drawn characters and great, passionate storytelling. The Sandcastle Girls is all that, but different, more powerful.”

“Bohjalian succeeds in depicting the horror, without sentimentalizing it. . .He has fulfilled the duty of anyone seeking to document a genocide — he ensures that we don’t look away.”

“The novel grips, as both a tender love story and an indictment of ethnic cleansing.”

“Entertaining. . .touching and believable, adding a softer dimension to what is at times a brutal story.”

“Chris Bohjalian is at his very finest in this searing story of love and war. I was mesmerized from page one. Bravo!”

“In his latest novel, master storyteller Chris Bohjalian explores the ways in which our ancestral past informs our contemporary lives — in ways we understand and ways that remain mysteriously out of reach. The Sandcastle Girls is deft, layered, eye-opening, and riveting. I was deeply moved."

Wally Lamb
author of The Hour I First Believed

“Bohjalian powerfully narrates an intricately nuanced romance with a complicated historical event at the forefront. With the centennial of the Armenian genocide fast approaching, this is not to be missed. Simply astounding.”

“Bohjalian’s powerful novel . . .depicts the Armenian genocide and one contemporary novelist’s quest to uncover her heritage. . .His storytelling makes this a beautiful, frightening, and unforgettable read.”

“An unforgettable exposition of the still too-little-known facts of the Armenian genocide and its multigenerational consequences.”

“A powerful and moving story based on real events seldom discussed. It will leave you reeling.”

“The scope of The Sandcastle Girls is almost epic. . .While there are the rich personal stories that his readers connect to, what he has achieved is much larger. Bohjalian has written a compelling and powerful novel that will bring the history of the genocide to a wide audience. The Sandcastle Girls will remain ingrained in your consciousness.”

“Bohjalian defly widens a telescopic lens to encompass the ‘Meds Yeghern,’ or ‘Great Calamity’ of the Armenian Genocide. . .Bohjalian’s writing style never rings a false note as it moves from present-day New York to the tragedy of World War I, his characters are as real as our own relatives. The well-researched history that forms the background informs, intrigues, and enchants — even as recollections of horror mount.”

“Remarkably supple. . .Bohjalian keeps his eyes on the personal, the little moments that illuminate broader social movements. . .Moment by moment, and passage by passage, the novel lights up a disturbing period of history.”

“A masterfully written story of war and love [that] is especially meaningful as we approach the centennial observance of the 1915 Armenian Genocide.”

“So poignant. . .Passion comes through clearly in The Sandcastle Girls, with Bohjalian’s carefully chosen words, his flesh and blood characters, and his vivid descriptions. . .The book is powerful, excellently written and gripping. . .It is a story of death and the triumph of life and quite possibly the best thing Bohjalian has written.”

“I was completely mesmerized by The Sandcastle Girls. Bohjalian pulls his readers into this fictional yet historical setting by educating, entertaining and enthralling them with beautifully written prose. . .Truly enchanting.”

“Sober, elegiac, and respectful. It’s not for the Lauras to capture the agony of those who perished, but they can, in small ways, show how human dignity reasserted itself in the face of unthinkable breaches of the social contract. At the opening of the novel, Laura reflects that Americans could benefit from a book called The Armenian Genocide for Dummies. Indeed, many of us could — but a fiction like Bohjalian’s, with its power to reach legions of readers, may be far more valuable.”

“Compelling. . .so filled is it with the suspense of life and death that The Sandcastle Girls is difficult to categorize. The story is fiction, but it is true. It’s history, bit it’s also art.”

“Stunning. . .Bohjalian has put forth a novel that transcends description: there’s simply so much to feel in the The Sandcastle Girls. . .Bohjalian has in many ways broken apart the traditional pillars of the novel and rebuilt them as part of his story.”

“Bohjalian’s story is both a mesmerizing and terrifying historical account and a wonderful love story.”

“A romance so beautiful and believable it hurts.” 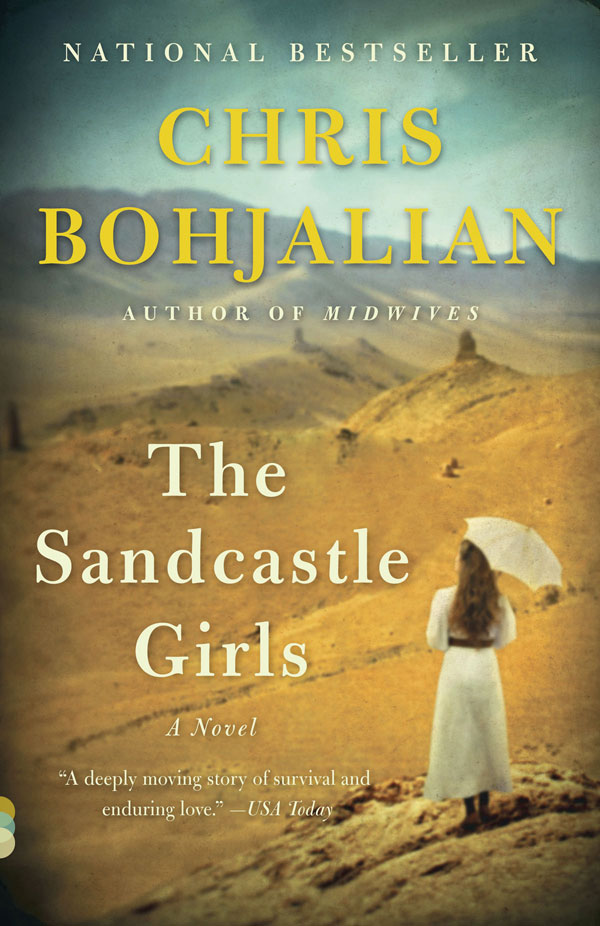